Stating that the Mega Food Park will facilitate value addition of products from Garo Hills, Chief Minister Conrad Sangma said, “There is a market and a demand for products made in Meghalaya. 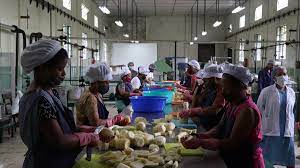 Shillong: The Union Ministry of Food Processing has sanctioned a state-of-the-art ‘Mega Food Park’ at Mendipathar, North Garo Hills district to promote farming and agriculture-based value addition through food processing, Chief Minister Conrad Sangma informed on Friday during a interaction with farmers producer groups.
Stating that the Mega Food Park will facilitate value addition of products from Garo Hills, he said, “There is a market and a demand for products made in Meghalaya.
Value addition, packaging and market linkage will open wide international markets for our products He also said that the government will provide support for packing, and market linkages to open avenues for the farmers and entrepreneurs of the State.
Sangma informed that in this financial year, 25,000 producers groups will be accorded financial assistance under the CM Support for Producers Group, through which Rs 5000 would be given to each individual in a group of 10 members as capital grant to upscale their enterprise or farming activities.
The Chief Minister spoke on various interventions being undertaken by the State government to promote farming and agriculture-based activities.
“The Government has accorded thrust to create an environment to promote organic products from the region,” he said, adding that through the Chief Minister’s Support for Producers Group, the Government will provide financial assistance as ‘grant’ for up-scaling of business and entrepreneurial activities.
The Chief Minister also took the opportunity to understand the problems and issues of the farmers, Self Help Groups (SHGs) and entrepreneurs from the area, so that government can initiate measures to improve their activities.
Sangma also visited a utility store started by Sister Rose, who had founded the Mendipathar Multipurpose Cooperative Society about two decades ago and has been promoting farmers and the SHG movement.
She is also known for introducing rubber plantations in Garo Hills.
The Chief Minister visited her rubber storage unit at Mendipathar and discussed measures to upscale rubber plantation and value addition and assured support to promote farmers and the SHG movement and asked Sister Rose to submit a detailed proposal for promoting farmers welfare in the Garo Hills region of the state.