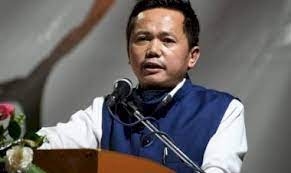 Gangtok: Jacob Khaling, Political Secretary to CM PS Tamang, participating in the Sikkim Darjeeling merger debate conducted by Himal World, asserted that ‘It is not possible.’
The burning issue here was debated for one and half hours. He stressed that Politicians should bear in mind that politics is not just propaganda, but they have to see the ground reality. It ( merger) does not look possible to us. So why should we spend our energy and youth now and future? ‘We believe in whatever has the possibility of materialising.
Political Secretary Khaling said, ‘We have one agenda and that is only to have public aspirations and opinion as prime matter. Our public has no support for the merger of the State with Darjeeling and the politicians also do not support it.’ He said he has already made the ruling party’s stand public two days back. It has also been confirmed by Chief Minister PS Tamang. Khaling said Sikkim has always supported the Constitutional demand of Gorkhaland but would like to be excused for not supporting the merger of Sikkim-Darjeeling.
About Sikkim –Darjeeling merger on the basis of History, Khaling made it clear that it was not necessary, ‘We (Sikkim) have not merged in 1975 on the basis of history. After that also many States constituted in the country like Chattisgarh had no historical reasons.
Subodh Pakherin Coordinator Gorkha Rashtriya Congress, tracing the recent history of merger demand said it started in 2004. But there are not many followers. There is no money, posts offered so cant get them. Sikkim –Darjeeling merger on the basis of the historical background has been asked for.
Manish Lama National President Bhartiya Gorkha Parisangh, making a straightforward statement said, Gorkha Parisangh said the party’s constitution does not have it. Commenting on going through Permanent Political Solution, he said it was outdated now. All the Political parties coming together on a common platform is not going to happen now, as presently eg only regional parties have been raising the demand of mergers. The drawback being never consulting stakeholders, we don’t have the culture of consulting, so solutions cant be there. Others who participated include Harka Giri, a politician.