The Union Minister assured that he would consider the need-based proposals which will benefit the farming community and the entrepreneur. 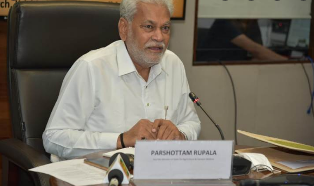 Kohima: Union Minister for Fisheries, Animal Husbandry, and Dairying Parshottam Rupala are on a two-day maiden visit to Nagaland from Thursday.

Official sources said that on his arrival, the Minister held a review meeting with MLA R. Khing, the Adviser for Animal Husbandry & Veterinary Services and Women Resources Development, L. Khumo MLA & Adviser for Fisheries and Aquatic Resources, Evaluation, Economics, and Statistics, along with Department Officials from Agriculture, Animal Husbandry & Veterinary Services and Fisheries and Aquatic Resources at the Dzukuo House, in the Raj Bhavan here.

Nagaland Agriculture Production Commissioner Y. Kikheto Sema chaired the meeting and power point presentations were given by the Department Officials from Animal Husbandry & Veterinary Services and Fisheries & Aquatic Resources. This was followed by interaction with the Union Minister.

The Union Minister assured that he would consider the need-based proposals which will benefit the farming community and the entrepreneur.

He encouraged the Department Officials to use modern and scientific technology for the welfare of the people through various programs of the Ministry.

The Union Minister also called on the Nagaland Chief Minister Neiphiu Rio at his official residence, which was followed by a dinner hosted by Minister of Agriculture & Cooperation G. Kaito Aye in honor of the Union Minister at a hotel at Kohima.

The Union Cabinet Minister will be visiting Kiphire (Aspirational district) tomorrow, on Friday to review the Centrally Sponsored Schemes and Central Sector schemes of the Government of India with the Deputy Commissioner and Department Officials concerned and will proceed for New Delhi in the evening, sources added.