Philippines gets US military helicopters

The Philippine ambassador in Washington, Jose Romualdez, told reporters in August that Manila was looking at Chinooks to replace the Mi-17s. 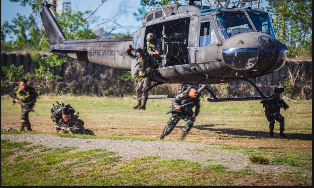 Manila: Manila will seek to have at least some of the reported $32m Russian helicopter deal down payment refunded by Moscow.

Philippine President Ferdinand Marcos Jr has said his country will source military helicopters from the United States after scrapping a $215m deal to buy 16 similar heavy-lift helicopters from Russia over fears of sanctions following Moscow’s invasion of Ukraine, reports BBC.

Manila will also seek to have Moscow return at least part of a multimillion-dollar deposit for the now-canceled batch of Russian Mi-17 helicopters, Marcos Jr said on Thursday, in his first public comments on the touchy issue involving Russia.

“We have secured an alternative supply (for heavy-lift helicopters) from the United States,” Marcos Jr, who was elected president in May, said at a business forum.

“Unfortunately, we made a down payment (to the Russian manufacturer) that we are hoping to negotiate to get at least a percentage of that back,” he said.

“But the deal as it stood maybe at the beginning of or in the middle of last year has already been canceled.”

On Wednesday, the Russian ambassador to the Philippines, Marat Pavlov, told the local media that his government had not been officially informed of the contract cancellation and considered the helicopter deal valid.

Production continued on fulfilling the order to deliver the Mi-17s, the ambassador said, adding that one had been ready for delivery since June.

The government of Marcos Jr’s predecessor Rodrigo Duterte signed the deal with Moscow in November 2021, but Duterte backed out of the agreement in the months following Russia’s invasion of Ukraine in February and the imposition of wide-ranging sanctions on Russia.

Marcos did not specify which US helicopters were chosen as the alternative to the Mi-17s, only that they will be manufactured in Poland.

The Philippine ambassador in Washington, Jose Romualdez, told reporters in August that Manila was looking at Chinooks to replace the Mi-17s.

The Boeing CH-47 Chinook could be the possible replacement for the Mi-17s, which the Philippines requires for combat missions, search and rescue, and medical evacuation, the ambassador said at the time.

The US deal – which matched the price agreed with Russia – would also include maintenance services and parts, terms that were not included in the deal with Russia, defense officials told local media organization GMA News.