The inaugural function was organised during the North East Regional Sports Week in connection with the celebration of Azadi Ka Amrit Mohotsav. 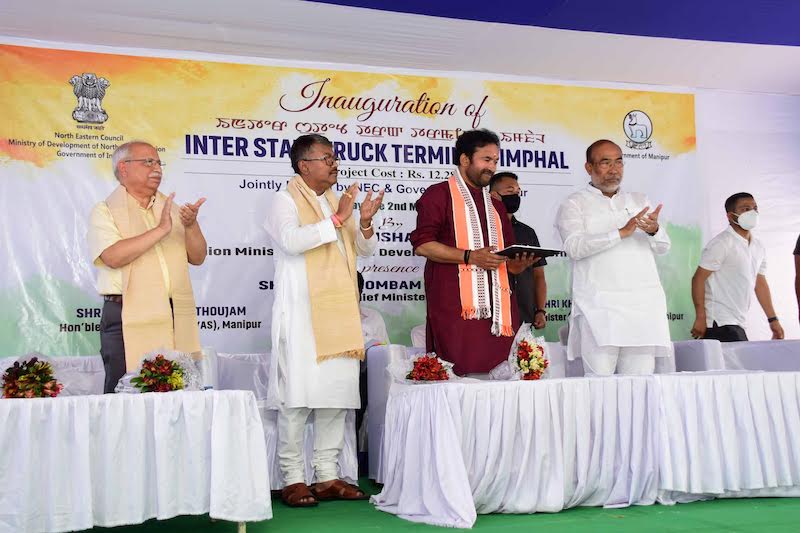 The inaugural function was organised during the North East Regional Sports Week in connection with the celebration of Azadi Ka Amrit Mohotsav.

The Chief Minister along with the Union Minister also attended the Football Final Match of the sports week played between host team Manipur and Tripura at the Main Stadium, Khuman Lampak Sports Complex, Imphal.

Speaking as the Chief Guest of the function, Union Minister G. Kishan Reddy said there is pace in development work in Manipur. He further expressed firm belief that under Chief Minister N. Biren Singh, Manipur will move forward.

He further congratulated the State government, North East Council and the organisers of the sports meet on the successful conduct of the Meet. to the young sportspersons of the country, he said we have a huge population and we should get medals accordingly.

He urged all parents to let their children play any sports, as sports and games bring discipline and boost confidence in the children.

Recognising the sporting prowess of the region, the Union Minister also said that the eight States of the NE region have brought medals in various sports disciplines including in boxing, badminton, football, archery, etc. He said in the sporting world, the youth of the region have shown immense talents and brought many laurels for the country.

Manipur is today setting an example in the country, he said, adding that Manipur has till date produced several Olympians, medal winners.

We all know that the game of Polo known as Sagol Kangjei in Manipur was born in Manipur and that it is today played across the country, he continued.

The Union Minister also said that Prime Minister Narendra Modi believes that Manipur is a sports powerhouse in the country and that the State will become an international sports hub.

Further stating that the Prime Minister had decided on the setting up of the first National Sports University in Manipur, he continued that we are moving forward with the target to ensure that the sports university is complete within two years.

He said the PM has worked with much dedication for the welfare and development of the NE region.

Chief Minister N. Biren Singh, in his presidential speech, said that today we have started enjoying the fruits of the National Sports University which was given to Manipur by Prime Minister Narendra Modi, who considers the State as a powerhouse of sports. There are more than 250 students from across the country in the university, he added.

Regarding construction of the Sports University, the Chief Minister said that the implementing agency had sought 30 months time for completion of the university; however, during a review meeting it was observed to be too long, and that the government will seek handing over of the university before the 2024 general elections.

People of the NE used to feel neglected before, however, Narendra Modi after becoming the Prime Minister in 2014, has given so many developmental projects including road connectivity and rail connectivity to the region.

The Chief Minister further expressed hope to host similar sports meet in the future and help in building a united NE and united India.

Meanwhile, the Chief Minister along with the Union Minister and other officials also interacted with the students of the National Sports University and inspected the facilities of the university at its temporary campus.

It may be mentioned that the Inter State Truck Terminus was completed during 2021-22 and is the first and only truck terminus in the State. It is located 2.5 Km from NH-02 on Khurkhul Awang Sekmai Road with a campus area of 18.34 acres and was constructed under NEC funding to provide a formal transit point for the inbound and outbound trucks and goods carrier for the State.