Amit Shah said the whole country calls her Rani as an honour for her contribution in the freedom struggle. 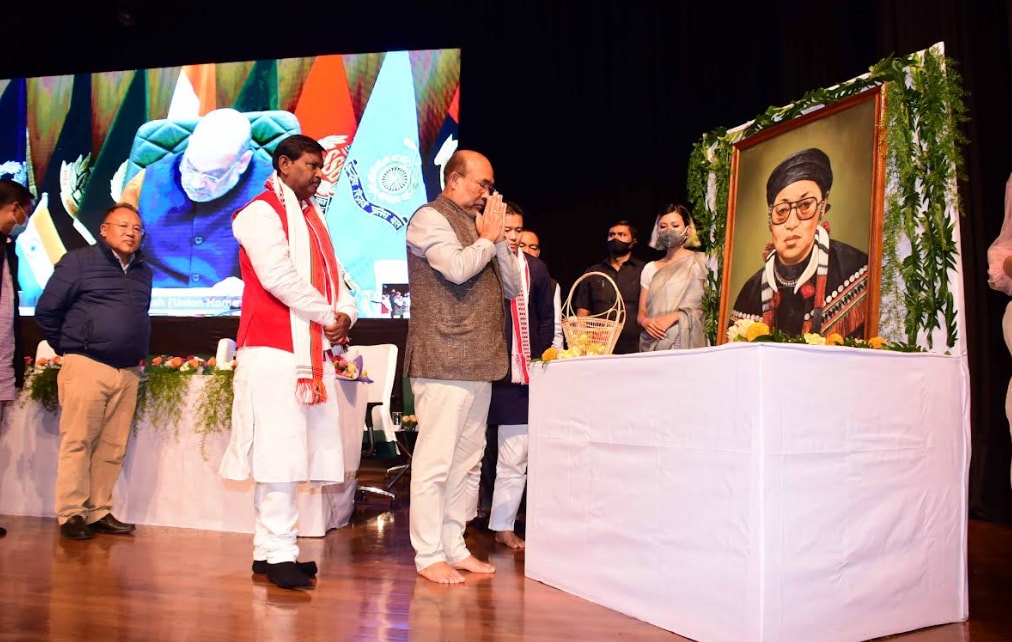 Addressing the gathering, Union Home Minister Amit Shah stated that the Museum was to be constructed honouring the contribution made by freedom fighters of the state during the freedom struggle against British Rule. He continued that construction of such a museum and paying respect to freedom fighters would imbibe a sense of nationalism to youths of the Country.

Regarding the renaming of Mount Harriet as Mount Manipur, the Union Minister recalled that, while reading about various mounts of Andaman and Nicobar Island, he came to know that Maharaja Kulachandra Singh was sent to Kalapani and kept on Mount Harriet for fighting against the British during the 1891 Anglo Manipur War. Mount Harriet was renamed as Mount Manipur in honour of the Maharaja’s contribution, he added.

Amit Shah said the whole country calls her Rani as an honour for her contribution in the freedom struggle. He also maintained that the freedom struggle of India would have been incomplete without the various revolts and uprisings which had taken place in different parts of the Country.

The Union Home Minister also mentioned the three objectives behind celebrating Azadi Ka Amrit Mahotsav throughout the Country, which was remembering the contribution of freedom fighters during the freedom struggle, imbibing a sense of nationalism in every citizen to contribute in the development of the country and making India one of the most developed countries when the country attains its 100 years of Independence. He further appreciated Chief Minister N. Biren Singh for the developmental works taken up in the state. He continued that the law and order of the State had also considerably improved alongside infrastructure development in various sectors.

Chief Minister N Biren Singh, while delivering his presidential speech, expressed gratitude to Prime Minister Narendra Modi, Union Home Minister Amit Shah and Union Minister of Tribal Affairs Arjun Munda for taking the decision to set up museums in different states to commemorate the contributions of tribal freedom fighters. He continued that the museum would honour the unsung tribal heroes of Manipur and would ensure that the legacy of their struggles and sacrifices is passed on to future generations. The museum would also instil a sense of pride in our history and contribution to nation-building. Important historical objects, documents, artefacts would be collected, preserved and showcased in the museum, he added.

Stating that the current generations are indebted to every freedom fighter across the country, N Biren Singh said that Rani Gaidinliu was one such figure who began her own version of the Non-Cooperation Movement against the British administration. He further informed that a monolith had been dedicated in memory of 18 martyrs who were exiled to Andaman and Nicobar Island after the Anglo Manipuri War of 1891.

Mentioning the importance of Manipur in India’s history, the Chief Minister recalled that the first Indian National Army flag was unfurled on Indian soil at INA Memorial in Moirang. He also informed that the State Government had acquired the historical land around the site where bombings of the Second World War are still preserved to develop it as a historical heritage. He assured that the Government would continue to strengthen nation-building and patriotic sentiments in the people of the State.

Union Minister of Tribal Affairs, Arjun Munda stated that the contributions of certain freedom fighters had made the attainment of the Country’s independence possible. As such, the Country was able to celebrate its 75 years of Independence. He continued that the Central Government had taken the decision to set up the Tribal Freedom Fighter Museum in memory of Rani Gaidinliu. He also assured that his Ministry would coordinate with the State Government and make sure that the construction of the museum is completed on time.