Clarifying his recent meeting with the Chief Minister and claims of ruling BJP, Pradyot said that his party is maintaining equidistance from all other parties but, there is no dearth of showing political courtesy and respect for the leaders. 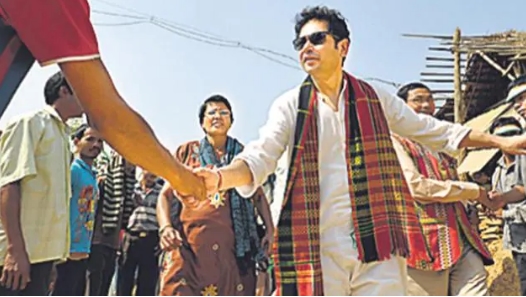 Agartala: Amidst bid of realignment in politics, Chief of the ruling TIPRA Motha in Tripura Tribal Areas Autonomous District Council (ADC), royal scion Pradyot Kishore Debbarman has reaffirmed that they will fight the upcoming elections alone if any national party doesn’t support their demand of Greater Tipraland.

Clarifying his recent meeting with the Chief Minister and claims of ruling BJP, Pradyot said that his party is maintaining equidistance from all other parties but, there is no dearth of showing political courtesy and respect for the leaders. So, there is no reason for drawing any conclusion and reading everything between the lines.

He mentioned that TIPRA has a political aim to form ‘Greater Tipraland’ as committed by the party in the run-up to the ADC elections this year.
Since the centre has constituted many small states since independence in 1947 there should be no problem in adding another state to the list; the demand of Greater Tipraland for the benefit of the indigenous people of Tripura said Pradyot.

The party had earlier defined the outlines and contours of Greater Tipraland, which was proposed to include parts of Barak valley in South Assam, part of Mizoram and Chittagong hill-tracts of Bangladesh where indigenous people irrespective of the community would be living and the boundary would be free from refugees.

He asserted that in the upcoming assembly election TIPRA Motha will go it all alone without any alliance with any national party unless getting written commitment and attributed, “Our experience with national parties is not good, they never think of the vital interests of the indigenous people and ADC, so there is no question of any alliance with them in the next assembly polls.”

Without naming BJP’s alliance partner IPFT, Pradyot lashed out at leaders and parties for allying with BJP and said that this proved futile as the so-called national parties simply did not understand the problems of the indigenous people. Those who went with the national parties should answer the questions of the underdevelopment of indigenous people who voted the party to power hoping for the end of suppression.
He also said that the funds given by the state government to ADC are not enough for development work in ADC and the Centre should immediately pass the 125th amendment of the constitution to pave the way for direct or earmarked funding of ADC by the Centre.