Apart from that in many areas of North Tripura, Dhalai, Khowai and Gomati districts a large number of IPFT voters could not cast the votes following threats, IPFT leaders claimed. 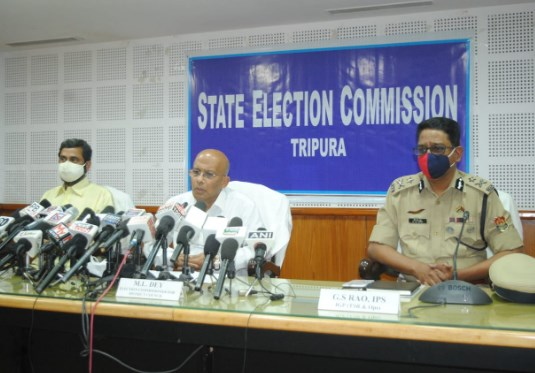 The state election commission (SEC) however, ruled out the possibility of re-polling but stated to re-examine the allegations of CPI-M. The SEC officials said in the final count polling percentage raised to 85.74 per cent, which doesn’t justify the claim of booth capturing or false voting or preventing a large number of voters from exercise their franchise.

Interestingly, both ruling parties and oppositions raised a complaint of violence and malpractices against each other. Even moving a step forward ruling BJP and IPFT have accused CPI-M and TIPRA of restoring terror tactics and attacking the leaders of the ruling front.

The IPFT assistant general secretary Mangal Debbarma who fought from the party’s main base Simna of West Tripura alleged he was not allowed by TIPRA cadres to oversee the polling process in his constituency and most of his voters were prevented from reaching polling booths.

Apart from that in many areas of North Tripura, Dhalai, Khowai and Gomati districts a large number of IPFT voters could not cast the votes following threats, IPFT leaders claimed.

The BJP Spokesperson Subrata Chakraborty told the media that a section of polling staff during the  election was found directly working for TIPRA violating the election codes and said, “We have got some specific details and we shall move to SEC seeking action against those government employees. However, despite a number of conspiracies hatched by CPI-M and TIPRA we are confident that BJP-IPFT will form the council in ADC.”

On the other, Congress president Pijush Biswas claimed they would be the decisive factor in majority seats of 28 –members’ council and said, “The voters were silently shifted from BJP-IPFT and CPI-M to Congress after seeing their performance. The highly communal polarisation of TIPRA has also frustrated a large number of voters in ADC, which ultimately swell the base of Congress.”

Meanwhile, CPI-M state secretary Goutam Das expressed satisfaction and said the voters came out defying the threats and intimidation of ruling front for the first time after BJP-IPFT came to power in 2018 although the election was farced in many areas. The party demanded re-polls in 65 polling booths alleging massive rigging and manipulation of the poll process, he underlined.

Slamming ruling BJP, TIPRA chief Pradyot Kishore Debbarman alleged that despite employing money power, mussel power and administration, indigenous people of the state came out largely for voting and in a few locations the ruling party-backed miscreants and outsiders were chased away by the villagers to assert their democratic rights, which is a good sign.

“We are confident TIPRA will form the next council in ADC and we welcome IPFT (BJP’s ally) to join us even if they cannot win much. TIPRA wants to establish exemplary governance with the indigenous parties for the indigenous people, as hill people have seen the ruling of national parties in ADC,” Pradyot added.