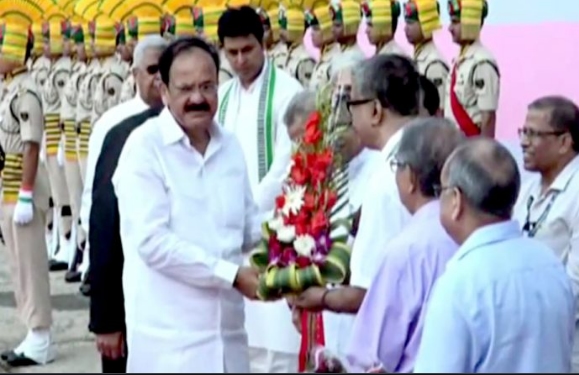 Agartala: Tripura government has accorded a civic reception to Vice-President of India M Venkaiah Naidu here on Wednesday at Rabindra Shatabarshiki Bhawan during his second visit to the state.
He arrived in the city by a special aircraft in the morning from Imphal on a two-day tour.

The Vice President is scheduled to leave for Dimapur tomorrow morning, which will be the last destination of his ongoing five-day long tour of northeastern India. He has already visited Assam, Meghalaya and Manipur and also launched a number of development projects in the states.

Naidu was received by the Chief Minister Biplab Kumar Deb accompanied by Deputy Chief Minister Jishnu Dev Varma and Union Minister of State for Social Justice and Empowerment Pratima Bhowmik at the MBB airport. Then he attended the civic reception where he highlighted the initiatives of the central government for holistic development of the Northeastern region.

He pointed out that the initiatives over the past seven and a half years reveal, development, peace and prosperity have been the top priorities of the central government and several contentious issues of the region were resolved in an amicable manner. Besides improving connectivity in the Northeast, the central government has targeted to make the region a tourism hub, he said.

After the civic reception, Naidu interacted with Primary Sector Achievers, members of self-help groups and front-line workers of the Covid-19 battle and appreciated the success of Tripura. He launched the Agartala Smart City Mission. In the afternoon, he will inaugurate an exhibition on Handloom and Handicrafts Products of North Eastern Region at Indoor Exhibition Building at International Fair Ground here.

In the evening, a cultural program will be held at Darbar Hall of Raj Bhawan demonstrating the indigenous art and culture to the honour of the Vice President. He will attend a dinner party along with the cabinet members, top officials and selected political personalities.