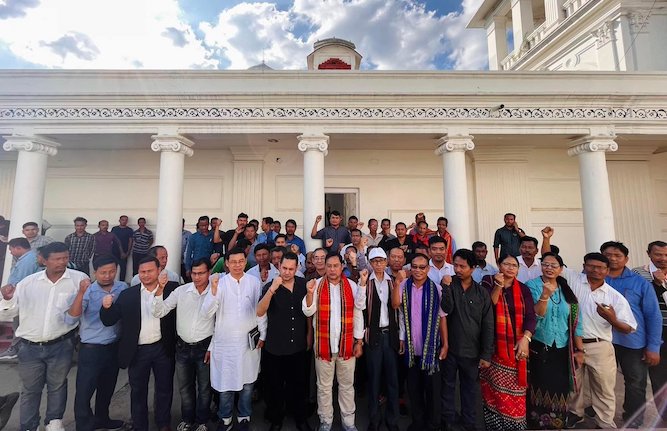 Agartala: The leaders of the IPRA Motha, which runs the Tripura Tribal Areas Autonomous District Council (ADC) on Saturday urged the indigenous people of the state to get ready to assert their rights by voting out BJP from power in next year’s Assembly polls.

Addressing an impressive rally at Vivekananda Stadium, ADC Deputy Chief Executive Member Animesh Debbarma alleged that BJP leaders “cheated” the innocent people of Tripura in the 2018 elections with “tall promises” and were still trying to “mislead” them with “false and fabricated” statements.

“BJP is accusing Motha led administration in ADC of corruption by issuing concocted statements, but the fact remains that the state government has this year paid only about Rs 600 crores out of the total budget of Rs 2600 crores as of now and is creating hindrance in the administrative functioning of ADC. To cover their failure, the BJP raised imaginary stories of corruption,” Debbarman said.

He pointed out that BJP had promised to set up an AIIMS-like hospital in Tripura, but after 56 months of this rule in the state not even a sub-divisional hospital is running properly, people are dying without treatment every day, schools have no teachers and none of the unemployed get proper jobs, he alleged.

Debbarma pointed out that BJP made a commitment to regularise the service of fixed-pay employees and pledged that employees would get the payment as per the recommendation of the seventh Central Pay Commission, neither of the two has been fulfilled.

“Law and order situation has been reduced to zero, rape and molestation have become the order of the day and BJP miscreants are attacking MLAs and leaders of the opposition in front of police but no action is being taken even now when the BJP government has been observing what it calls good governance in every house for two months,” Debbarma stated adding that time has come to defeat BJP in the 2023 assembly elections.

Criticising BJP and CPI-M, he said in the 1993 assembly elections communists won promising “inner line permit” (to protect the life, culture and heritage of tribal’s, several states of northeast have imposed restrictions on non-tribals from entering ADC areas) but soon after winning elections the CPI-M forget it for 25 years.

Similarly, ahead of the In 2018, assembly elections, BJP won the tribal votes with the commitment to empower the ADC and upgrade it to Territorial Council; “But so far, they have done nothing, and rather cheated the innocent people of Tripura”, he alleged.

“We believe they would come up with a new promise before the next elections to garner our support, but Motha is not going to compromise unless there is a constitutional solution for the state’s indigenous people’s demand for Greater Tipraland and we shall continue to fight till our last drop of blood,” Debbarman stated.

Pradyot reiterated that some parties are trying to create confusion on communal lines to prevent TIPRA Motha and said, “We are not against any community or caste but want a constitutional solution to the indigenous people’s demand for Greater Tirpraland. State police had not permitted our rally on some baseless pleas and today seeing the gathering they must realise the footprint of Motha.”