T20 WC: Kohli, SKY named in Team of the Tournament

India’s star all-round superstar Hardik Pandya, who had a superb tournament, has been included as the 12th man. 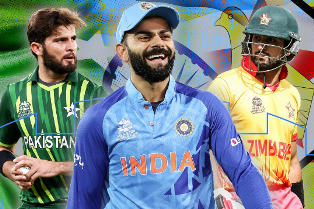 Melbourne: Virat Kohli, Suryakumar Yadav and Hardik Pandya are named in the Team of the Tournament, which was announced after the ICC Men’s T20 World Cup final at MCG.

Kohli turned on the heat in this T20 World Cup, producing at a major tournament once again. He finished as the highest run-scorer in this tournament, with 296 runs to his name at a sensational average of 98.66, smashed four fifties, including a magical knock of 82* against Pakistan in the Super 12.

India’s number four, Suryakumar, had an almost equally incredible outing as Kohli. He entertained everyone with his aggressive batting style throughout the course of the tournament, amassing 239 runs at an incredible strike rate of 189.68.

India’s star all-round superstar Hardik Pandya, who had a superb tournament, has been included as the 12th man.

Pandya took eight wickets in six matches and finished as his team’s third-highest scorer despite coming in down the order. Were it not for his scintillating 33-ball 63, India would have never even threatened to reach a competitive total in the semi-final against England.