Swearing-in of Droupadi Murmu to take place on Monday 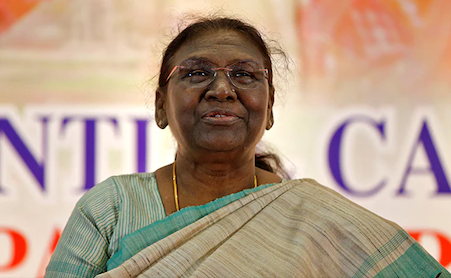 New Delhi: The swearing-in ceremony of President elect Droupadi Murmu will take place on Monday in the central hall of the Parliament House.

Earlier, the Election Commission received the Return of Election and a Declaration of Result of election from the Returning Officer PC Mody who is also the Secretary General of Rajya Sabha.

Mody announced the election of Murmu after completion of counting of the votes last evening in Parliament House complex.

A signed copy of the certification was handed over to the Home Secretary by Dharmendra Sharma, Senior Deputy Election Commissioner and Narendra Butolia, Senior Principal Secretary. It will be read out at the time of oath taking ceremony of the new President, Election Commission said.

In order to facilitate the members to attend the ceremony, Rajya Sabha Chairman Venkaiah Naidu has decided that the Rajya Sabha will meet on that day at 2 pm instead of 11 am.

The Ministry of Personnel has also ordered closure of certain government buildings in the area till 2 pm to ensure smooth conduct of the swearing in-ceremony. The construction of new Parliament building will also be stopped during the time of the ceremony.

Murmu is the first tribal woman to hold the position of President of India.