The clearing of the other elephant corridors would start next year, he said. 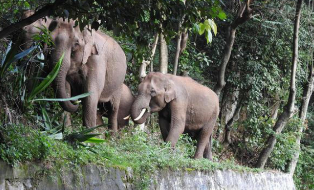 Colombo: The Sri Lankan government has decided to evict people who are illegally residing in or near the 16 elephant corridors and provide them alternative lands for cultivation and settlement and also give them some compensation.

Under the first phase of the project, three elephant corridors where elephant-human conflicts are raging would be cleared, The Island newspaper on Wednesday quoted Agriculture, Wildlife and Forest Conservation Minister Mahinda Amaraweera as saying.

The clearing of the other elephant corridors would start next year, he said.

The government has decided to stop the settlement and cultivation on elephant corridors. The Wildlife Department has said that there are currently 16 elephant corridors in the country and they are affected by human activities, the Island reported.

These matters have affected the elephants resulting in wild jumbo attacks on villages and humans.

Several other joint programmes have been proposed to prevent the human-elephant conflict.

Accordingly, action will be taken to prevent the release of cattle into the sanctuaries and wildlife parks, removing unauthorised cattle sheds in wildlife parks and building electric fences to ward off wild elephants.