The Navy and Police divers were conducting search operation to locate the missing persons. 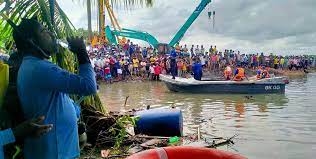 Colombo: At least six persons were killed and 11 others were hospitalised after a passenger ferry capsized in the Kuringankerni lagoon of Kinniya on Tuesday.

Daily Mirror quoted the Sri Lankan Navy as saying that the deceased included students also. It said 14 people had been rescued, adding that the injured have been admitted to Trincomalee and Kinniya Hospitals.

The Navy and Police divers were conducting search operation to locate the missing persons.

The newspaper said around 25 persons, including teachers and students were on board, when the ferry capsized.

Search and rescue operations were underway, it added.