It was on Wednesday that Russia's military top brass announced they were withdrawing from that side of the river, the BBC reported. 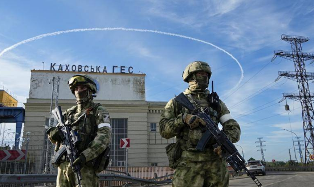 Moscow: Russia’s Defence Ministry has said it has completed the withdrawal of troops from the key city of Kherson in Ukraine’s south.

All soldiers were moved across the Dnipro river to the eastern bank early Friday morning, the Ministry said, BBC reported. No military equipment or weapons were left behind on the west bank, it added.

All morning, photos have appeared on social media showing several spans destroyed on the only road bridge out of Kherson. That prompted bloggers who closely follow the war to say Russia’s withdrawal from the western bank of the Dnipro river was over.

Now the Defence Ministry in Moscow, cited by Tass news agency, has confirmed that all of the Russian servicemen on the western bank have crossed to the other side.

It was on Wednesday that Russia’s military top brass announced they were withdrawing from that side of the river, the BBC reported.

The decision to retreat is a significant blow for Russia’s military in the face of a Ukrainian counter-offensive. President Vladimir Putin did not take part in the televised announcement.

The Ministry said on Friday that there were no losses of personnel, weapons or military equipment and that no hardware was left behind.

Kherson remains the only regional capital to have been captured by Russia since the invasion began in February, so losing it is a significant blow, the report said.

Pictures that emerged earlier on Friday morning appeared to show that the Antonivskiy Bridge — the main bridge from the city of Kherson used by Russian forces to get to the eastern side of the Dnipro river — had been destroyed. It is unclear at this stage what caused the bridge to collapse

It was not clear what caused the bridge to collapse. Some Russian sources claim that they destroyed it themselves, having completed the withdrawal process.

Meanwhile, President Volodymyr Zelensky said overnight that Ukrainian forces had retaken dozens of towns and villages as they advanced towards Kherson city, the report said.

Moscow’s commander in Ukraine announced the withdrawal on Wednesday saying it wasn’t possible to continue supplying the city.

If Kherson is back in Ukrainian hands by the end of the day, which seems possible, then this would be a hugely consequential moment in the nearly nine-month-long war.

The loss of Kherson is on a par with Russia’s humiliating withdrawal from the capital Kyiv earlier in the year, and caps a stunning three-month change of fortunes for the Ukrainians.