"Our relations were very sustainable during many difficult times in the past, and I have not the slightest doubt that mutual respect and the search for balance of interests will prevail in our relations for the future as well" 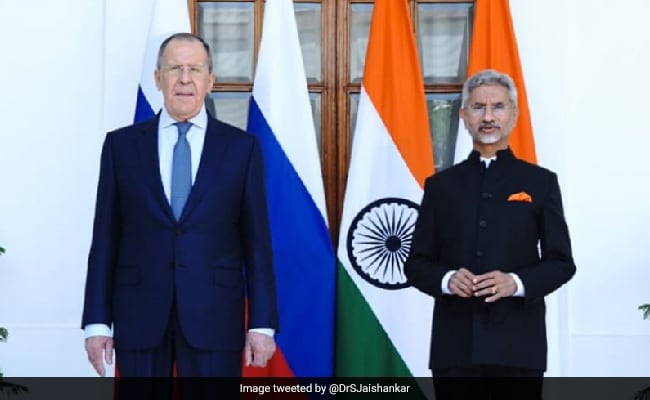 New Delhi: In a visit being keenly watched by the US and the West, External Affairs Minister S Jaishankar and visiting Russian Foreign Minister Sergey Lavrov on Friday held talks with the latter appreciating India for taking the Ukraine crisis in “its entirety and not just a one-sided way”.

EAM Jaishankar was brief in his opening remarks, and pressed for dialogue and diplomacy as the way forward, without referring to Ukraine. “Our meeting today takes place in a difficult international environment, apart from the pandemic.

“India has always been in favour of resolving differences and disputes through dialogue and diplomacy: In our meeting today we will have an opportunity to discuss contemporary issues and concerns in some detail,” he said.

Lavrov, who arrived last evening on a two-day visit to firm up an energy deal and payments in rupee-ruble terms to sidestep the western sanctions, also referred to Moscow’s latest push for a new balance in geopolitical equations. He said that “friendship is the key word to describe the history of Russia-India relations”.

“Our relations were very sustainable during many difficult times in the past, and I have not the slightest doubt that mutual respect and the search for balance of interests will prevail in our relations for the future as well,” he added. He said the bilateral special privileged partnership with new Delhi “is one of the key priorities of Russian foreign policy”.

“It’s equality and mutual trust which underlies our acts on the international area, and in the context of the multipolar world which is being objectively shaped, which you alluded to yesterday while addressing a conference in New Delhi,” Lavrov said referring to the talk on Thursday evening between the EAM and visiting UK Foreign Secretary Liz Truss.

“We are certainly interested in having the world order balanced which makes it sustainable,” the Russian foreign Minister said. He said the two nations have intensified their bilateral context and the Russian President and Indian PM are in regular touch with each other.

“I will report to the President about my negotiations here. He sends his best regards to PM Modi and I will appreciate an opportunity to deliver the message personally,” he added.

Referring to the India-Russia summit held in New Delhi in December last year for which President Putin flew down for a couple of hours, he said it was a very useful summit as well as the 2+2 meeting between their foreign and defence ministers.

He said the two sides have discussed the dates of the next meeting of the intergovernmental commission on economic cooperation. “We continue to implement projects in the areas of energy, science and tech, outer space, pharma, industry and of course we cooperated and continue to cooperate in the efforts to fight the coronavirus infection.”

“Indeed as you mention our western colleagues would like to reduce any meaningful international issue to the crisis in Ukraine,” he added. “You know our position and we do not fight anything, and we appreciate that India is taking the situation in the entirety of facts and not just one-sided way,” Lavrov added.

The US and UK have voiced their displeasure at India continuing to hold talks with Russia, especially for the purchase of discounted Russian oil against payment in rupee-ruble terms.