The weatherman predicted heavy snowfall at high altitudes during the next two days till Monday. 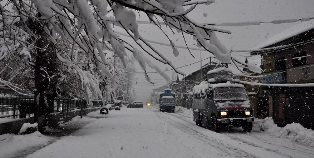 Srinagar: The Meteorological (MeT) Department on Saturday forecast widespread rain and snow in Kashmir on Sunday and Monday.

The MeT said it will be generally cloudy at most places on Saturday and rain and snow may occur on higher reaches starting evening.

The weatherman predicted heavy snowfall at high altitudes during the next two days till Monday.

“Moderate Rain/snow (over higher reaches) is very likely to occur at most places of J&K.

“Plains of Kashmir, mainly South, are likely to receive (2-3)inches of snowfall during November 6-7.

The snowfall and low temperature may lead to temporary disruption of surface transportation, mainly over Zojila, Jammu-Srinagar national highway, Sinthan Top and Mughal road during November 6 & 7, the MeT said.

It cautioned the horticulturists that the snowfall may cause damage to orchards and also advised people to check the highway status before embarking on a journey.

“Prior to embarking on journey, know status of road from Traffic Police to avoid inconveniences. Farmers are advised to harvest agriculture/horticulture produce which are vulnerable to snowfall and low temperature,” said MeT.