The two highway projects are the Atal Setu at Rangpo and the two-lane Chisopani Traffic Tunnel Project in Gangtok. 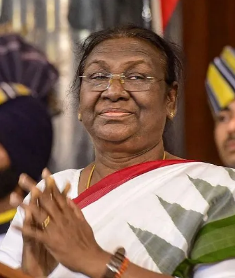 Gangtok: President Droupadi Murmu inaugurated two major highway projects and threw open or laid the foundation of five other development schemes entailing a cost of over Rs 700 crores during her two-day trip to Sikkim that ended on Saturday.

The two highway projects are the Atal Setu at Rangpo and the two-lane Chisopani Traffic Tunnel Project in Gangtok.

The Atal Setu at Rangpo, on NH-10 connects Sikkim with West Bengal and has been built by the National Highways and Infrastructure Development Corporation at a total cost of Rs 133.49 crores.

The Two-lane Chisopani Traffic Tunnel Project along National Highway-10 has been executed by the National Highways & Infrastructure Development Corporation Limited, at a cost of Rs. 29 crores.

Murmu also inaugurated the 100-bed girls’ hostel at V.C. Ganju Lama Senior Secondary School at Ravangla in Namchi District. The hostel has been constructed by the Social Justice and Welfare Department, Government of Sikkim, under the “Pradhan Mantri Jan Vikas Karyakram (PMJVK)” with the financial sanction of Rs. 324.50 lakh from the Ministry of Minority Affairs, Government of India, under the funding pattern of 90:10 ratio.

Thereafter, she laid the foundation stone for the 300-bedded District Hospital in Singtam, under Gangtok District, which will be executed by the Social Justice and Welfare Department, Government of Sikkim. The project has received a financial sanction of Rs. 148.971 crores from the Ministry of Minority Affairs, Government of India, under the scheme of ‘Pradhan Mantri Jan Vikas Karyakram (PMJVK).’

The foundation stone for World Renewal Spiritual Brahma Kumari Centre at Namchi was also laid by President Murmu. The project will be spread over a total area of 17,600 sq ft with an estimated construction cost of Rs. 5 crores which will be funded under the State Plan and executed by the Building and Housing Department, Government of Sikkim.

President Murmu also laid the foundation stone for widening and improving the road from Namchi district headquarters to Birdang via Kitchudumra, connecting Namchi district in South Sikkim with Soreng and Gyalshing districts in West Sikkim.

The total length of the road will be 9.382 km, with a way width of 5.5 metres. The Roads and Bridges Department, Government of Sikkim, will implement the project with funding aid from the North East Special Infrastructure Development Scheme (NESIDS) under the Ministry of DoNER, Government of India, with a budgetary allocation of Rs. 61.36 crores.

Besides, she laid the foundation stone of the National Highway, connecting West Sikkim and Nepal.

Mention of Sikkimese Nepali community as ‘Foreigners’ needs to be Expunged: Tamang