The decision to resign was tied up with the acceptance of Pakistan Muslim League (N) President Shehbaz Sharif's nomination papers for prime minister's elections, PTI had raised objections. 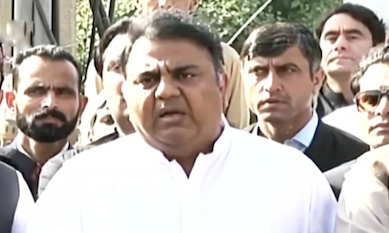 Islamabad: Pakistan’s Ex-information minister and senior Pakistan Tehreek-e-Insaf (PTI) leader Fawad Chaudhry on Sunday announced that the party’s members would resign en masse from the the National Assembly on Monday.

The decision to resign was tied up with the acceptance of Pakistan Muslim League (N) President Shehbaz Sharif’s nomination papers for prime minister’s elections, PTI had raised objections. In a later development, the NA Secretariat rejected the objections and accepted Shehbaz’s nomination, the Dawn reported.

PTI’s Central Core Executive Committee meeting was held in Bani Gala with former Pakistan PM Imran Khan and “the whole situation was analysed” there, Chaudhry said while speaking to the media in the national capital. The committee suggested to Imran Khan that the PTI should resign from the assemblies starting with the NA, he said.

“If our objections on Shehbaz Sharif’s (nomination) papers are not addressed, then we will resign tomorrow,” he said. The National Assembly session to elect the new premier will be held at 2pm on Monday.

On March 28, Sharif, joint Opposition’s candidate for prime minister, had tabled the no-confidence motion in the Assembly against Imran Khan. The voting on the no-confidence took place after the NA debated on the matter for over 12 hours in which Imran Khan lost the trust vote, becoming the first PM in Pakistan’s history to be ousted by a No-Confidence Motion.

The opposition’s no-trust motion against Imran Khan succeeded an hour past midnight on Sunday, with 174 members in the 342-strong house voting in favour of the resolution.