Proning can be beneficial to increase oxygen levels in Covid-19 patients: Experts

The proning process can prove to be lifesaving to increase the levels of oxygen in COVID-19 patients. This is a process in which the amount of oxygen can be improved by lying on the stomach. 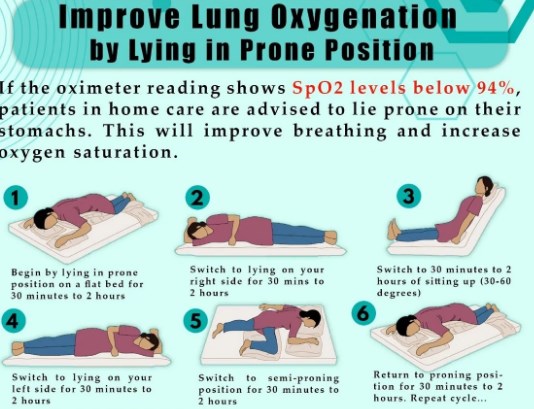 Chandigarh: As all the staff of the Haryana Health department, including doctors and para-medical staff, are engaged in fighting the Covid-19 pandemic, proning exercise has come to be a shot in the arm for patients, says experts.

The proning process can prove to be lifesaving to increase the levels of oxygen in COVID-19 patients. This is a process in which the amount of oxygen can be improved by lying on the stomach.

Proning is a process of changing the position of a person’s body in a safe way, in which the person lies on the ground facing the ground. In the field of medicine, proning is an accepted state of the body, which makes the breathing process comfortable and increases the level of oxygen in the body.

The procedure of proning can be quite beneficial for COVID-19 patients with shortness of breath, especially patients under home isolation.

The proning process (lying on the stomach) promotes ventilation and is needed only when the patient is feeling shortness of breath and his SPO2 level has gone below 94. The amount of oxygen in the body can be increased by adopting this process during home isolation.

During home isolation, it is extremely important to regularly monitor the SPO2 in addition to other symptoms such as temperature, blood pressure and blood sugar. Lack of oxygen circulation can cause the patient’s condition to deteriorate further. Many lives can be saved by better management of proning and ventilation at the right time.

During the procedure, place a pillow under the patient’s neck, place one or two pillows between the chest and the upper part of the thigh and two pillows under the calf of the foot. One will need four to five pillows to self-prone. Keep changing the lying position regularly, they stated.

Do not do proning in the event of pregnancy, major cardiovascular diseases, unstable spine, thigh or hip bone fractures and about an hour after meals. Also, do proning only for as long as you are able to do it easily.

Ahead of possible third Corona wave, Delhi to have 5,000 health assistants: Kejriwal