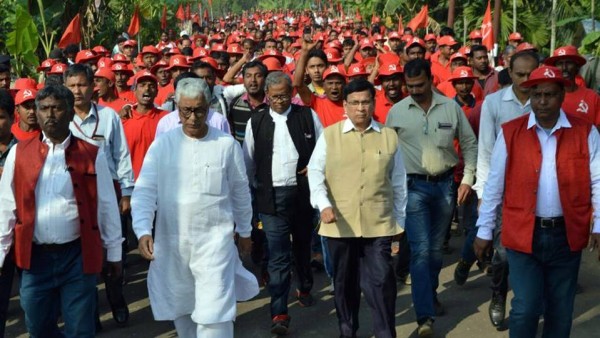 Agartala: The opposition CPI-M in Tripura on Sunday accused the officer-in-charge of a police station of being hand-in-glove with criminals who allegedly killed Marxist leader Benu Biswas earlier this week. Biswas (48), was killed at Kamalpur village on Thursday.

Earlier, the local CPI-M MLA of Rajnagar Sudhan Das was attacked by BJP goons at least six times in the last four years in areas under the jurisdiction of the P R Bari police station after the Biplab Kumar Deb-led government came to power, he alleged.

In none of the cases, police undertook any step against the criminals and did not even make a minimum inquiry into the allegations, said Chowdhury.

“A few anti-social elements of the constituency took shelter in the ruling party and forged an alliance with police officers of P R Bari police station including Chakma. With the support of police and BJP leaders, these elements have been perpetrating violence, especially on CPI-M supporters. They had beaten Benu to death,” Chowdhury alleged.

Without investigating the case of Benu’s murder on Thursday, the police scripted a narrative that it was not a murder. While the autopsy was in progress, Chakma tried to convince the protesting public saying there were no marks of injury on his body and the police headquarters had also issued a statement on that line, he stated.

The victim was beaten to death by “BJP hooligans” on Thursday night when Benu was coming home from the local market, alleged Chowdhury.

According to a report, the four accused had earlier on several occasions given the victim life threat and their behaviour was indifferent in the village even after recovery of the body, which indicated their involvement in the crime, Chowdhury claimed, adding that police made up a cock-and-bull story overnight to create a safe passage for the real culprits.