Tapor Pullom, a resident of Monigong in Shi-Yomi district, along with his friend Taka Yorchi had gone to the jungle for herbal collection and a hunting trip along the China border on September 11, 2015. 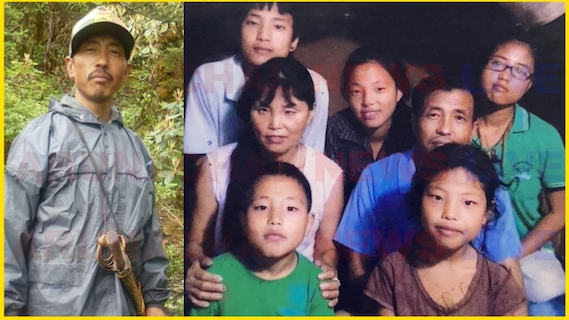 Itanagar: The family members of Tapor Pullom – the man who was allegedly abducted by China’s People’s Liberation Army (PLA) from the Line of Actual Control (LAC) in Monigong area of Shi-Yomi district in Arunachal Pradesh about seven years back – on Sunday made a heart-wrenching appeal to the Government of India as well as the State Government to bring him back safely.

Tapor Pullom, a resident of Monigong in Shi-Yomi district, along with his friend Taka Yorchi had gone to the jungle for herbal collection and a hunting trip along the China border on September 11, 2015.

While his friend, Yorchi, returned after some time after falling sick, Pullom did not. His friend later revealed that he saw Pullom being surrounded by ‘Gore’ (a locally used term to refer to Chinese PLA soldiers) and then taken away by them.

“Just like Miram Taron of Tuting, Upper Siang who was brought back safely within a few days of his abduction by the PLA troops last month, please bring my father-in-law also back home if at all he is alive. We just seek this much help,” Pullom’s daughter-in-law Amoni Diru Pullom appealed to the Govt of India and Arunachal Pradesh Govt during a press briefing here today.

She was accompanied by a few members of her family and her father-in-law’s friend Taka Yorchi.

She further sought to know whether Pullom is alive. “Please let us know if he is dead. In that case we would like to know how he died,” she said. Amoni claimed that despite approaching the local police and the administration immediately after the incident had borne no outcome as they did not respond to it.

She further said that the matter was also apprised to then Union Minister of State for Home Kiren Rijiju, who had assured them that the abductee would soon return to them but nothing of that sort happened. “We waited. Other than that, what else could we do,” Amoni further said.

Pullom’s family’s fresh appeal came just a few days after Arunachal East MP Tapir Gao had raised the matter in the Parliament and made a fervent appeal to the Centre to initiate necessary steps for the early release of the man abducted by the PLA in 2015. Ever since his abduction, Pullom’s family has been running from pillar to post, seeking support from the Indian Army as well as the Government of India for his release, Gao had said.

“As (PM Narendra) Modi ji has freed six abductees from the PLA in the last two years, I request the Government of India that Tapor Pullom of Kemang Gaon, Monigong, Shi-Yomi district, Arunachal Pradesh be brought back by putting all the concerned agencies into action,” the BJP MP had said in the Lower House of Parliament.