Opposition members have so far continued to raise their demands to suspend the business and take up the issues raised by them. 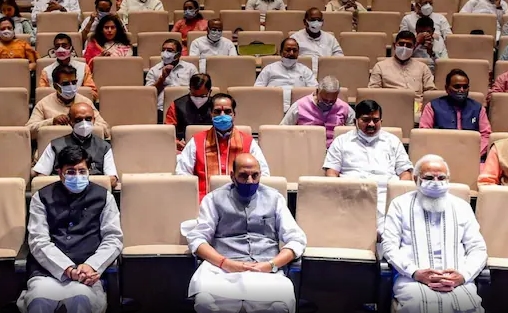 New Delhi: Prime Minister Narendra Modi on Friday held a meeting with his key ministers in Parliament House to formulate the government’s strategy amid continued protests by Opposition members in both Houses of Parliament.

The proceedings of both the Houses have been disrupted since the commencement of the Monsoon Session due to protests by Opposition MPs mainly on price rise, hike in GST, and alleged misuse of central agencies.

Both Lok Sabha and Rajya Sabha were disrupted minutes after the Houses reconvened on Friday.

Rajya Sabha Chairman M. Venkaiah Naidu refused to admit notices given by a number of Opposition members including Leader of Opposition Mallikarjun Kharge over price rise, hike in GST, alleged misuse of central agencies, and Agnipath scheme of recruitment in the armed forces.

Opposition members have so far continued to raise their demands to suspend the business and take up the issues raised by them.

On Thursday, Rajya Sabha Deputy Chairman Harivansh managed to conduct Question Hour amid protest by Congress MPs over the questioning of Sonia Gandhi by the ED.

The disruptions in Parliament have been debated even out in the open on Friday with Joshi and Congress leader Jairam Ramesh locking horns on Twitter.

“Yet again the Modi Sarkar refused an urgent debate in the Rajya Sabha on galloping price rise and senseless increase on GST rates on food items. House adjourned till 12 noon. The Opposition is united that we want a debate on this critical issue impacting crores of Indians,” Congress MP Jairam Ramesh tweeted.

“FM Nirmala Sitharaman has to be present in the house, listen to members of all the parties, their demands, and respond. Can’t they wait till FM recovers? Is it not basic courtesy? Congress has a habit of lying and spreading misinformation, Jairam Ramesh is continuing this legacy,” responded Pralhad Joshi on Twitter.

On Friday, the government said in the House as well that Sitharaman has been down with Covid 19 and the Opposition should wait till she recovers.

The ongoing Monsoon Session assumes significance not only for the election of the President and Vice President but for the important government legislative business.

Before the start of the session, the government said that various departments have indicated to present 32 bills in Parliament during the current session and 14 of them are ready and have already been discussed by Standing Committees of Parliament.

The Monsoon Session of Parliament commenced on July 18 and it will continue till August 12.