PM has time to go abroad & visit Bengal but did not find time to meet farmers seating 20 km away: Pawar

Sharad Pawar said that even Union Home Minister did not find time to meet the farmers. He said that the centre would have to pay a heavy cost for not addressing the worries of the farmers. 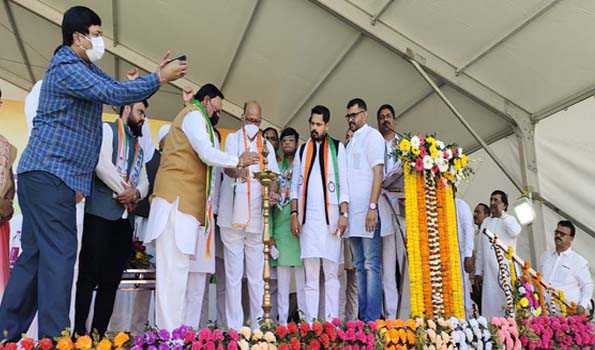 Ranchi: NCP national president Sharad Pawar on Sunday attacked the centre over the ongoing farmer’s agitation against the agricultural laws going on the borders of Delhi for the last 100 days.

Addressing a party event at Harmu grounds of the state capital he said that Prime Minister Narendra Modi has time to travel abroad and gets time to address the election rallies in Bengal but he could not find time to meet the farmers who are sitting on agitation for the last 101 days only 20 kilometres away from his residence.

Sharad Pawar said that even Union Home Minister did not find time to meet the farmers. He said that the centre would have to pay a heavy cost for not addressing the worries of the farmers.

He said that the Nationalist Congress Party was committed to protecting the rights of the farmers and all opposition parties should also think over the issue seriously. He said that in the development of Maharashtra people of Jharkhand and Bihar have given their blood and sweat and it is due to their hard work that Maharashtra has become a developed state.

Striking a local connect he said that he was extremely proud after having visited the land of Bhagwan Birsa Munda and Mahendra Singh Dhoni. He credited Dhoni for taking India to great heights of World Cricket.

Recalling an incident he said that when in the middle of the England tour Rahul Dravid had decided to step down at that time Sachin Tendulkar had suggested the name of Mahendra Singh Dhoni and he was greatly happy to have come to the land of Mahendra Singh Dhoni. The meeting was also addressed by party general secretary Praful Patel and others.