Maria Ressa and Dmitry Muratov "are representatives of all journalists who stand up for this ideal in a world in which democracy and freedom of the press face increasingly adverse conditions," the Nobel committee said in its citation. 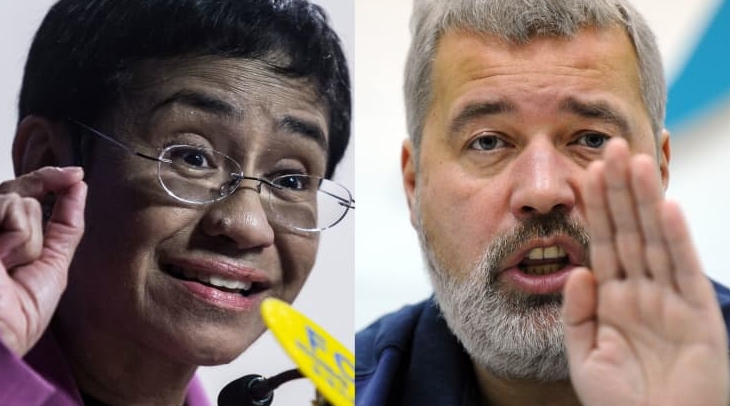 Oslo: The Nobel Peace Prize 2021 was awarded jointly to Rappler co-founder Maria Ressa and Dmitry Muratov, the editor of Russia’s Novaya Gazeta newspaper, “for their efforts to safeguard freedom of expression, which is a precondition for democracy and lasting peace,” the Norwegian Nobel Committee said on Friday.

Maria Ressa and Dmitry Muratov “are representatives of all journalists who stand up for this ideal in a world in which democracy and freedom of the press face increasingly adverse conditions,” the Nobel committee said in its citation.

Maria Ressa
Maria Ressa uses freedom of expression to expose abuse of power, use of violence and growing authoritarianism in her native country, the Philippines. In 2012, she co-founded Rappler, a digital media company for investigative journalism.
As a journalist and the Rappler’s CEO, Ressa has shown herself to be a fearless defender of freedom of expression. Rappler has focused critical attention on the Duterte regime’s controversial, murderous anti-drug campaign, the Nobel committee said.

Dmitry Muratov
Dmitry Muratov has for decades defended freedom of speech in Russia under increasingly challenging conditions. In 1993, he was one of the founders of the independent newspaper Novaja Gazeta.
Despite the killings and threats, editor-in-chief Dmitry Muratov has refused to abandon the newspaper’s independent policy. He has consistently defended the rights of journalists.
Novaja Gazeta’s fact-based journalism and professional integrity have made it an important source of information on censurable aspects of Russian society rarely mentioned by other media. Since the newspaper’s start, six of its journalists have been killed.

The prestigious award is accompanied by a gold medal and 10 million Swedish kronor (over $1.14 million). The prize money comes from a bequest left by the prize’s creator, Swedish inventor Alfred Nobel, who died in 1895.
Last year’s prize went to the World Food Programme, which was established in 1961 at the behest of US President Dwight Eisenhower to fight hunger around the globe. The Rome-based UN agency was lauded for seeking to end starvation as “a weapon of war and conflict.”
On Monday, the Nobel Committee awarded the prize in physiology or medicine to Americans David Julius and Ardem Patapoutian for their discoveries into how the human body perceives temperature and touch.

The Nobel Prize in physics was awarded on Tuesday to three scientists whose work found order in seeming disorder, helping to explain and predict complex forces of nature, including expanding our understanding of climate change.

Benjamin List and David W.C. MacMillan were named as laureates of the Nobel Prize for chemistry on Wednesday for finding an easier and environmentally cleaner way to build molecules that can be used to make compounds, including medicines and pesticides.

The Nobel Prize for literature was awarded Friday to UK-based Tanzanian writer Abdulrazak Gurnah, who was recognized for his “uncompromising and compassionate penetration of the effects of colonialism and the fate of the refugee.”

(With inputs from agencies)