In today’s programme, a brief history of the two heroes (Thangal General and Bir Tikendrajit) was also narrated by SDO Senapati/Purul and SDO Tadubi/Lairouching. 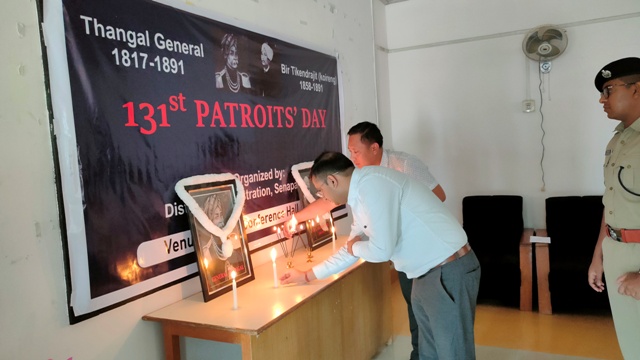 Imphal: Patriots’ Day was observed across the state of  Manipur and rich tributes were paid to the heroes and martyrs who sacrificed their lives to defend the sovereignty of Manipur.

DC  Somorjit Salam, led the floral tributes to mark respect and reverence to the forefathers who made the supreme and selfless sacrifices for the freedom and sovereignty of our motherland against the mighty British.

In his speech, DC Kakching reminded us about the supreme and selfless sacrifice made by our forefathers during the freedom struggle. He also expressed that there is a need for more unity and cooperation amongst the people for better growth and development in society.

Speaking on the occasion, DC, Senapati, Mahesh Chaudhari said everyone must learn to live an ideal life and work hard like Thangal General and Bir Tikendrajit who had sacrificed their life for the liberation of Manipur under British rule. He also urged everyone to come forward and sacrifice their time for the betterment of society.

In today’s programme, a brief history of the two heroes (Thangal General and Bir Tikendrajit) was also narrated by SDO Senapati/Purul and SDO Tadubi/Lairouching.

Floral tribute and lighting of candles were also led by Senapati DC and SP then followed by District Level Officers in paying homage to the martyr.

The Programme was attended by SP, Senapati, Karthik Malladi, and all the District Level Officers

In his speech, DC Thoubal reminded the gathering about the supreme and selfless sacrifice made by our forefathers during the freedom struggle. He also expressed that there is a need for more unity and cooperation amongst the people for better growth and development in society.

The observance began with floral tributes offered to the photographs of Thangal General and Bir Tikendrajit led by the Deputy Commissioner.  Prayers by the religious leaders of different faiths were performed as part of the function.

In Chandel district, Patriots Day observation was attended by Deputy Commissioner Chandel, Mayanglambam Rajkumar; SP Chandel, Pandey Hemant; Commandant  8MR,  T. Thongzapao attended the function. The function started with the laying of wreaths and floral tributes followed by Gun salutes and two minutes of silence in the memories of the departed heroes of Manipur’s last war of  Independence, 1891.

Speaking on the occasion, Mayanglambam Rajkumar,said that we should not forget the extreme sacrifices made by our forefathers, from all the different communities of the state for a united and independent Manipur against the mighty British empire.

In today’s function, floral tributes were also paid by all the DLOs, officials, and members of different communities of the district. The function ended with the vote of thanks by the ADC Chandel Md. Firoj Khan.

Speaking on the occasion, DC Lourembam Bikram remarked there is no greater sacrifice than to lay down one’s life for the motherland. Reflecting on the supreme and selfless sacrifices made by Bir Tikendrajit and Thangal General during the Anglo –Manipuri War of 1891, the DC also said that devotedly abiding by the Fundamental Duties as responsible citizens will pave the way in ensuring a better society and brighter tomorrow. He urged all to emulate the unconquerable spirit and patriotism of the great forefathers for the progress and development of the State and country.

On this monumental occasion, the District Information Office, DIPR also carried out “Prabhat Pheri” at various locations of the district today. Patriotic songs were played through loudspeakers to rekindle the sense of patriotism among the people.