Gun salute was also given by a team of Manipur Rifles at Shaheed Minar by firing three rounds as a mark of respect to the departed leaders. 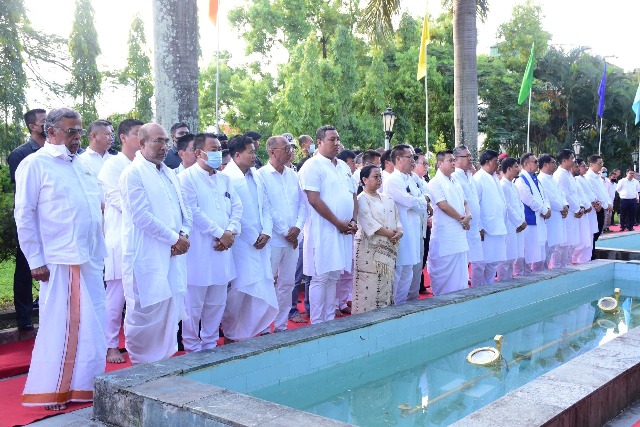 Imphal: Manipur observed Patriots’ Day Saturday to pay respect to the souls of those who laid down their lives for their motherland against the British Empire in 1891.

Gun salute was also given by a team of Manipur Rifles at Shaheed Minar by firing three rounds as a mark of respect to the departed leaders.

Speaking at the main function held at B.T. Park, the Governor said, even though Manipur lost the Anglo-Manipuri War and came under British rule, the series of battles in 1891 showed the courage of the Manipuris who fought against the strongest power of the world at that time, showing that freedom is more important than their own lives.

He said, many freedom fighters were killed and 22 leaders including Maharaja Kulachandra were exiled for life and five were hanged to death including Yuvaraj Tikendrajit and Thangal General.

The Governor continued that today we are commemorating the sacrifices made by all those both known and unknown for the cause of freedom. When we look back in history, it is clear that the British entered the fray because of the disunity among the Princes of Manipur. We cannot change history but we can always learn from history that disunity among ourselves will bring downfall to our nation.

Ganesan further said that it was the sacrifice of innumerable people of India including from Manipur who brought back independence on 15th August, 1947.

Manipur was merged to the Union of India on 15th October, 1949 and since then it is an important part of the country. He said as the nation is celebrating 75th years of Independence as Azadi Ka Amrit Mahotsav, all should celebrate the Independence Day with full enthusiasm. He said, these days we have been witnessing a strong sense of patriotism among the youths in the country. Our hard won independence must be protected at all costs and we should strive to bring up our nation as a leader among the comity of Nations.

Chief Minister N. Biren Singh, while speaking at the function said, we should remember the supreme sacrifices made by our forefathers for defending freedom fighting against the mighty British in those days. He said, we should respect the sense of patriotism and spirit of our forefathers who fought against the British defying all odds for the sake of their motherland.

Yuvaraj Tikendrajit and Thangal General and many other leaders fought to their last breath for the sake of freedom. The Chief Minister further said that it is time to make India a powerful nation and all should work for nation building. We should respect each other and work together to make a stronger State. All should work for unity and any divisive or sectarian forces should be neglected, he added.