Over 20 houses gutted in Kishtwar fire in J&K

Police here said that a devastating fire broke out in Chag, Gandhari Paddar around midnight. 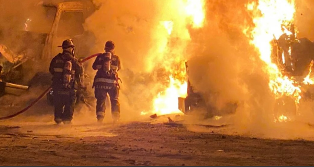 Jammu: More than 20 houses were gutted in a fire early Friday in the remote Paddar tehsil of Kishtwar district in Jammu and Kashmir.

Police here said that a devastating fire broke out in Chag, Gandhari Paddar around midnight.

“Around 23 houses are reportedly gutted in fire and a huge loss of property is also reported,” they said.

“It is a hilly and remote area and the fire tenders cannot be pressed into service to douse the wildfire,” they said, adding that locals and police teams took hours to control the blaze and finally succeeded in dousing the flames but teams still were on job for the cooling process.

Ali demanded immediate rescue operations and rehabilitation of over 23 families who were left homeless.

He said that the civil administration should immediately send relief materials, rations, and medical aid for the families who have suffered due to the fire and demanded that a proper assessment of damages to property and livestock and cattle be made.

He said: “There is no road connectivity to the place where the residential houses have been gutted and hence, the authorities should propose the construction of a road to the village and other remote areas so that in case of such an incident immediate response teams are sent.”