CPI-M state secretary Goutam Das also accused that the tender was awarded to the highest bidder by the Directorate of Economics and Statistics under the influence of CM’s Principal Secretary J K Sinha . 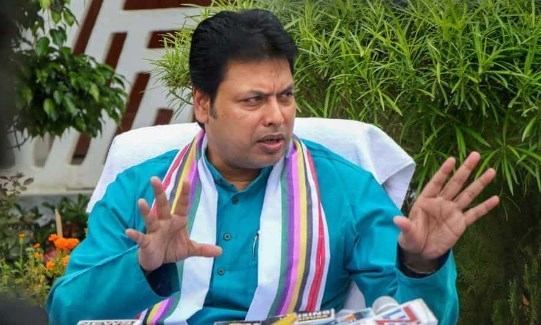 Agartala: Tripura Chief Minister Biplab Kumar Deb has landed in a fresh controversy after floating a tender to survey the citizens’ opinion on his leadership.

The opposition CPI-M has already launched a protest stating that the Chief Minister cannot use public funds for his personal gratification.

They alleged that the exercise has no relation with the well-being of Tripura.

CPI-M state secretary Goutam Das also accused that the tender was awarded to the highest bidder by the Directorate of Economics and Statistics under the influence of CM’s Principal Secretary J K Sinha .

“Tripura is undergoing a serious economic crisis, which was reflected in the recent budget of the state. At a time when the most important development projects have been stopped due to paucity of funds but it is surprising how the CM could think of the luxury to assess his personal image with public money. We strongly condemned it and demanded to stop it immediately and institute an inquiry how the highest bidder was selected for the work,” Das told media.

He further alleged that Chief Minister Biplab Kumar Deb and a few of his followers in the party in connivance with some bureaucrats have been state’s money outside for last two years.

The local agencies, contractors, suppliers and even the vendors are hardly getting to work in government projects.

The BJP-IPFT government opened up the treasury for the outside companies and NGOs to loot Tripura, Das added.

According to a report, Directorate of Economics and Statistics had invited tender to conduct the Tripura Citizen Mood Survey across 60 assembly constituencies based on 36,000 samples.

Each questionnaire has been designed to canvass Chief Minister’s popularity on welfare activities launched by the BJP-IPFT government to deal with Covid pandemic.

Allegedly, to get a favourable survey report, Chief Minister’s office denied the lowest bidder who happened to be from the state and chose the highest bidder. As many as five companies had participated in the bidding process and three of them were considered where the lowest price was quoted Rs 41.40 lakh followed by Rs 47 lakh and Rs 61.55 lakh.