Not correct of Chinese to object to visits by Indian leaders to Arunachal Pradesh: MEA 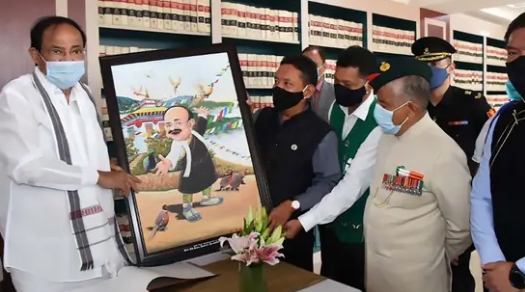 New Delhi: India said on Thursday that it treats with seriousness the comments and objections issued by China regarding visits by Indian leaders to any part of India, including Arunachal Pradesh, and added that it is “not correct” on the part of the Chinese side to make such remarks.

Ministry of External Affairs spokesperson Arindam Bagchi, at a media briefing, also said that if there is disengagement on the border between India and China and there is a solution to the remaining areas in Eastern Ladakh then it will help take the overall relations forward.

“We take these comments very seriously,“ he said, referring to the remarks by the Chinese Foreign Ministry spokesperson objecting to the visit to Arunachal Pradesh by Vice President Venkaiah Naidu. “If our Vice President visits a state and if anybody comments on that or objects to it, it is not correct, and that is why taking it with utmost seriousness we issued the statement.”

integral and inalienable part of India, this we have told the Chinese side in clear terms on several occasions.

“Indian leaders go regularly to Arunachal Pradesh, like they would to any other state of India.

Objecting to the visit of Indian leaders to a state of India does not stand to reason and understanding of the Indian people,” he said.

Citing the press statement issued by India on the 13th commander level talks between India and China held on October 10 at the Chushul-Moldo border point, he said: “We have said repeatedly that the LAC situation is due to unilateral attempts by the Chinese side to alter the status quo and in violation of the bilateral agreements.

“For resolving the situation in the remaining areas we proposed constructive suggestions, but the Chinese side was not amenable to it and was unable to present any suggestion from its side.

“Both sides have agreed to continue communications and maintain stability on the ground, that’s a positive development,” he added.

“We hope the Chinese side will fully abide by the bilateral protocols and agreements and will work towards early resolution of the remaining issues in eastern Ladakh,” he added.

He said the disengagement will be according to the path suggested during the meeting between EAM S Jaishankar and his Chinese counterpart Wang Yi in Dushanbe on the sidelines of the SCO, where it was agreed that the remaining issues should be resolved at the earliest.

“We have also maintained that resolving the remaining issues and maintaining peace and tranquillity in the border will help in the progress of relations of our two countries,” he said.

“If there is a solution to the remaining areas that will help take our overall relations forward, it will make it easier to do so,” the spokesperson added.