No Pariwarvad here: Shah launches special membership drive for BJP in UP 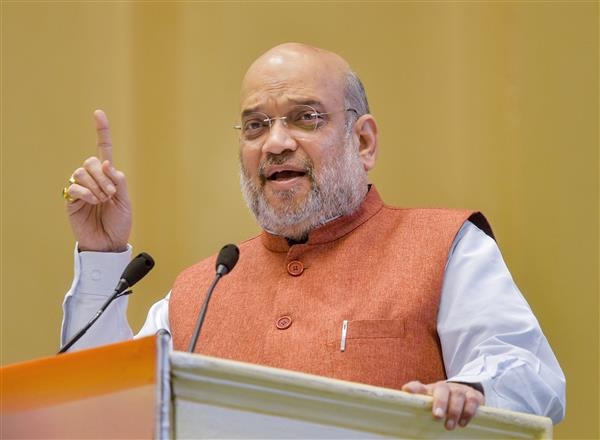 Lucknow: “There is no scope of family planning,” Union Home Minister Amit Shah said at his rally here on Friday as he launched BJP’s special membership drive for Uttar Pradesh to enrol 2 crores more members ahead of the crucial 2022 assembly polls.

BJP has fixed a target of 4 crore members in UP before the upcoming elections to be held next year.

Lauding the Yogi Adityanath government, Shah said since 2017 most of the promises made by the BJP government in the state have been fulfilled and of the 10 per cent that remains will be done in the next three months.

He also said it was Adityanath who uprooted the mafia and corruption culture that ailed the state before BJP came to power.

The “Mera Pariwar, BJP Pariwar” programme was held at the Defense Expo venue in the Vrindavan colony, near the airport. The special membership drive also witnessed a large number of leaders from other parties joining the BJP.

Anjali Choudhury, a BTech student was the first new member of the party. She also received the party’s card. Besides four other youths were given the new membership. Shah also flagged off campaign vehicles for the party.

Earlier Shah was given a rousing welcome at the airport where Pradhan, Singh, Adityanath and Deo Singh were present to receive him.

Thousand of party workers and leaders were assembled at the airport to catch a glimpse of Shah.

UP BJP has 2.30 crore members in the state. Now the party has set a target of 1.70 to 2 crore new members through the special membership campaign before the assembly polls.

Sources said the party has issued instructions to MLAs and other leaders to organize 10-10 camps for membership and register the new members through filling up forms and missed calls. Beneficiaries of central and state government schemes will also be included in the new member’s list.

Shah will next address the senior party leaders and former MLAs at Indira Gandhi Pratishthan.

He will also meet in-charges, office bearers and election in-charges at the state party office around 3 pm.

After his night stay in Lucknow, Shah will leave for Dehradun, on a Saturday morning.