Zoo Director Asis Samanta said the anacondas, born on July 11, are "currently doing fine" under the strict observation of veterinarians. 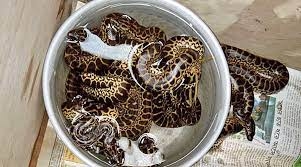 Kolkata: The Alipore Zoological Gardens on Saturday announced the birth of nine anacondas, which pushed their population in the facility to 20.

Zoo Director Asis Samanta said the anacondas, born on July 11, are “currently doing fine” under the strict observation of veterinarians, the PTI reported.

Each weighs around 100 gm and measure one foot in length, he said.

“We had brought two fully grown pairs of male and female yellow anacondas to the zoo in 2019 from Chennai. One of the pairs gave birth to seven babies last year and the other to nine earlier in the month, he stated.

The reptiles must have liked the artificial Amazon- type habitat created for them, he quipped.

“The Alipore zoo, probably, has the highest number of anacondas in the country now,” Samanta said, adding that it was yet to be decided if the newborns would be put on display once the facility reopens.