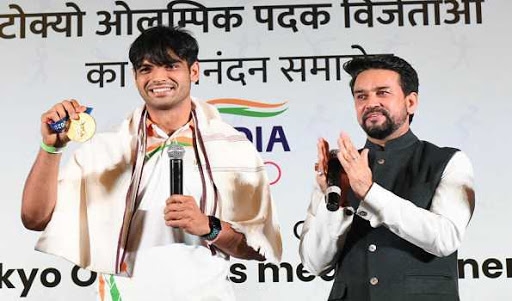 “We have waited for 121 years for an Olympic medal in athletics and Neeraj Chopra ended that wait. Neeraj, you haven’t just won a medal but also the hearts of Indians. You have inspired generations to come in the future,” said Anurag.

“The Olympains who returned as medallists from Tokyo have become sources of inspiration for the rest of the youth in the country,” said Sports Minister.

Among the first to be felicitated by Sports Minister and Anurag Thakur and Minister of State Nisith Pramanik was Tokyo Olympics bronze medallist Bajrang Punia.

“Thank you all for the love and respect we have got. It feels like I have won a medal again today. About the injury, it was my last bout so I wanted to give it my all, I didn’t care about the knee injury.

“Even if my knee had broken it wouldn’t have mattered to me I just wanted to give my best and get the medal,” said Bajrang Punia, who won the bronze in men’s 65 kg freestyle wrestling for Team India at the Tokyo Games.