In Mon district, the Konyak Union is demanding identification of all security personnel involved in the firing incident and that they are tried in court. 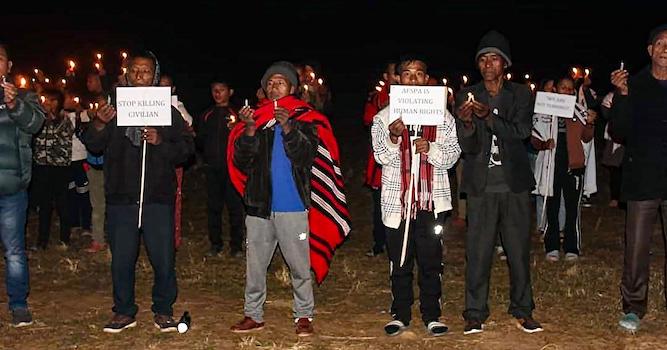 Kohima: The Konyak Union, the apex traditional body of the Konyak Naga tribe, has again pressed for an urgent independent inquiry under a competent investigating agency into the firing incidents earlier this month that left 14 civilians dead in Mon district.

The KU has also demanded the inclusion of two members from the Naga civil society in the special investigating team. According to sources, public rallies were organised across eastern Nagaland on Thursday.

In Mon district, the Konyak Union is demanding identification of all security personnel involved in the firing incident and that they are tried in court.

While 13 villagers including six daily wage labourers of a colliery died in two separate incidents of firing between Tiru and Oting village under Tizit sub-division on December 4, another villager taking part in a violent protest a day later against the incidents was killed in a fresh round of firing by the forces. A soldier also was killed.

The security forces were said to be looking for suspected underground cadres of the NSCN(K) based on “credible intelligence of likely movement of insurgents”.

Other demands of the Konyak Union, which were put before the President of India on December 6, included action against the erring officials within 30 days, withdrawal of the 27 Assam Rifles from Konyak tribe dominated areas and immediate scrapping of the Armed Forces (Special) Powers Act (AFSPA), 1958, from the entire North-East Indian region.

In a representation to the President of India Ram Nath Kovind through the Nagaland Governor Jagdish Mukhi. the Konyak Union, Konyak Students Union and KNSK said that taking advantage of the blanket immunity of AFSPA, the 21 Para security forces have “brutally massacred” 14 innocent civilians.

They further stated that terming the incident as a case of “mistaken identity” cannot be tolerated. “The particular incident was a deliberate attempt to take innocent lives which has been proved by concrete evidence available in the public domain,” the Konyak organisations stated.

They added that if justice is not delivered within the stipulated time, the Konyak civil organizations will have no option left, but to proceed with further steps.

Nagaland ENPO not to participate in R-Day celebration