Addressing the gathering Neiphiu Rio emphasised that unity was the need of the hour and called upon everyone to work together, adding that many things could be achieved only when there was unity. 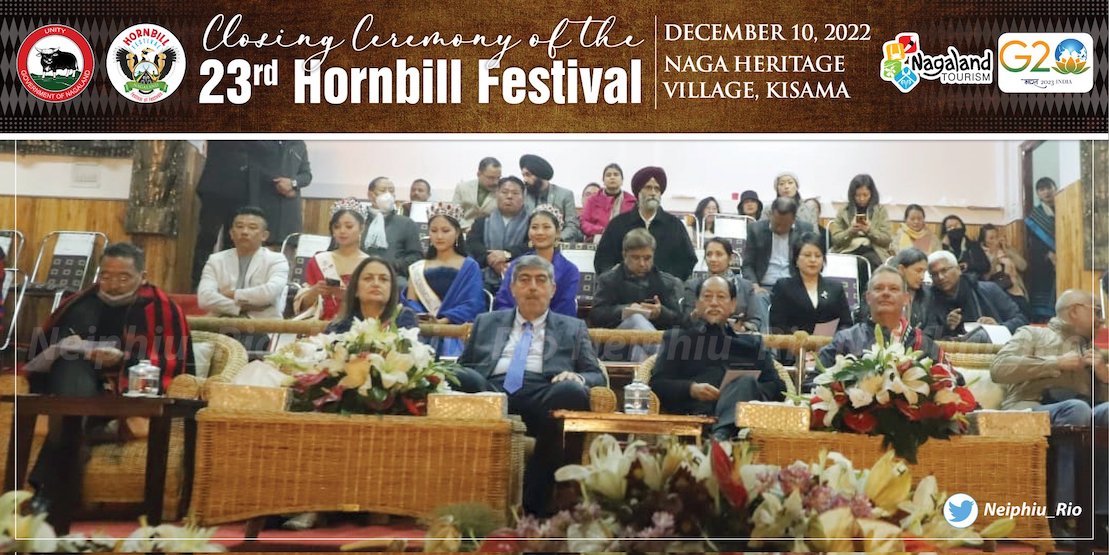 Kohima:  The 23rd Hornbill Festival concluded at the Main Arena of the Naga Heritage Village at Kisama with Nagaland Chief Minister Neiphiu Rio as the Special Guest and Sanjay Kishan Kaul, a Judge of the Supreme Court of India as the Honoured Guest.

Addressing the gathering Neiphiu Rio emphasised that unity was the need of the hour and called upon everyone to work together, adding that many things could be achieved only when there was unity.

He further thanked the organisers and all allied departments for fostering a spirit of collaboration and partnership over the years and urged the guests and visitors to take back the sweet memories of time spent at the festival and be Nagaland’s ambassadors.

Rio said that the festival is a place for people to gather and to share, to celebrate the past, the current and most importantly, share the richness and uniqueness of the Naga Heritage with the world.

He pointed out that at present; unity is something we all need, not just in our sector, but in our society, the unity to work together and to take the right and responsible steps, to continue moving forward together.

Greeting the gathering at the closing ceremony of the 23rd Hornbill Festival on Saturday, Judge, Supreme Court of India, Sanjay Kishan Kaul said that the people of Nagaland are peace loving people who co-exist in harmony with their unique cultural and traditional system.

He said that Nagas are known not only for their bravery but hospitality and warmth which he has experienced during his stay in Nagaland.

Calling Nagaland as ‘Land of Festivals,’ he said the state has been on the national and international map of tourism which is a positive step in ushering development in the State, and he hoped that the festival will bring people together from all across the globe and create a sense of unity in diversity.

Nagaland Adviser for Tourism and Art and Culture Khehovi Yeputhomi said that post-pandemic, the Hornbill Festival recorded an overwhelming number of visitors and tourists.

He also made a special mention of all the cultural troupes for performing at the Hornbill Festival and thanked the participants, organizers and sponsors for the successful culmination of the Festival.

A cultural presentation ‘Made in Nagaland’ was performed on the occasion. Chef Gary Mehigan, Author and Restaurateur, and one of the original judges of MasterChef Australia lit the Hornbill Bonfire, which was followed by the Unity Dance, representing the Naga tribes.  Singh during a visit at the Kashi Viswanath temple, Varanasi, in Uttar Pradesh on Sunday.