Some of the Dairy Farmers shared their experience and lamented the distance they are compelled to travel to Banks.Finally,they were happy to know that now Sikkim GPUs will be having Bank Kiosk. 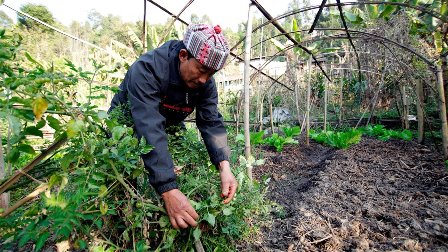 Gangtok: Regional unit of National Bank for Agriculture and Rural Development,headed by Sanjay Kumar Gupta,General Manager,here has come up with a special developmental project for saturating dairy farmers with Kisan Credit Card –Animal Husbandry and other developmental goals for Sikkim.The programme in this regard with the collaboration of Department of Animal Husbandry &Veterinary Services ,Govt of Sikkim and Banks, was held today at a local hotel,presided over by the Minister for Agriculture,Horticulture,AH& VS and Fisheries,Lok Nath Sharma.

Minister,LN Sharma,the Chief Guest launching the campaign handed over the KCC-AH Rupay Card followed by inauguration of KIOSK.A number of Dairy Farmer applicants, from across the State were happy to receive loan sanctioned by Sikkim State Cooperative Bank( SISCO ),subject to terms and conditions.

‘We have been always concerned about the hands that feed us ,the farmers.It has been a matter of great concern to improve their income and upgrade their economic standard.Since Two years we have been requesting banks to extend credit to farmers.Now,Govt of India,has started a new scheme ,Kisan CC-AH,through it the Dairy Farmers can access credit of Rs 1.6 Lakhs, whether they possess land or not.Earlier,it was not so! The scheme is in the interest of Dairy Farmers,’said Minister LN Sharma.He also expressed hope that such a scheme could be introduced for those involved in Fisheries,Piggery,Poultry and Goatary.

General Manager,NABARD ,Sanjay Gupta,stated that ‘KCC-AH will be available to those having Milk Union tie up,without any land ownership,while the existing KCC-Crop holders would be eligible for add on credit facility upto Rs 2 Lakh for AH and Rs 3 Lakhs will be the overall limit depending on number of live stock. Those without land ownership will be eligible for Rs 1.60 collateral free .Those who pay promptly will be given subsidy @3% on a limit of Rs 2 Lakhs.’

Some of the Dairy Farmers shared their experience and lamented the distance they are compelled to travel to Banks.Finally,they were happy to know that now Sikkim GPUs will be having Bank Kiosk.