‘Brojendragee Luhongba’ released in 1973 is the first film by a Manipuri director. 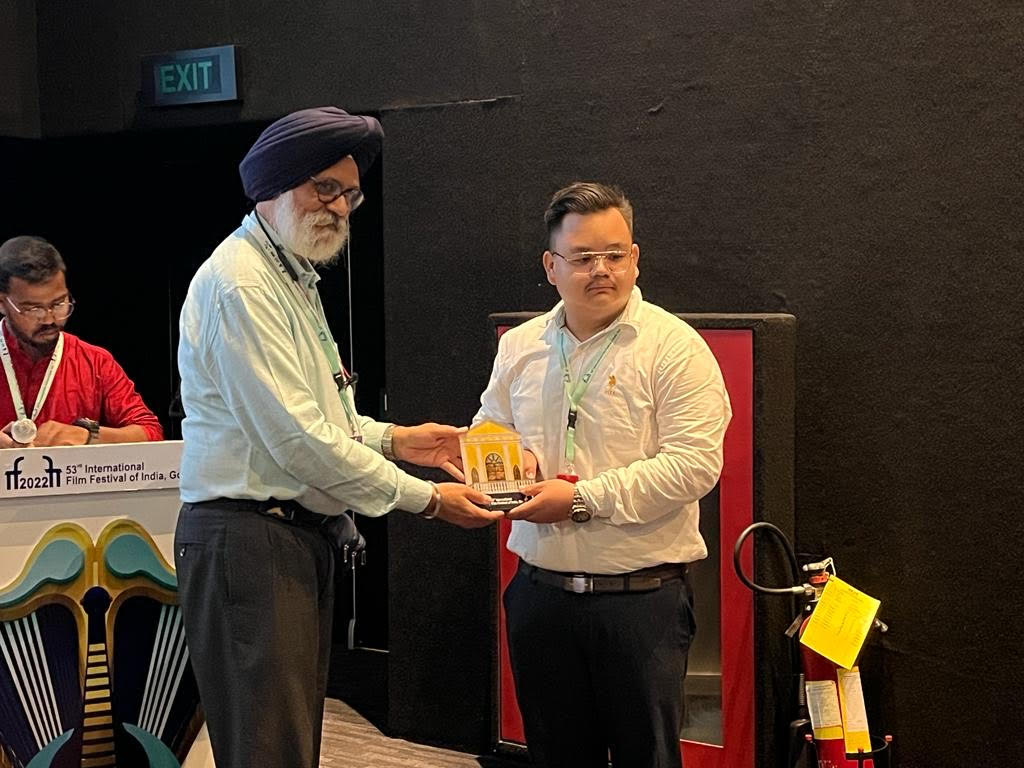 For 21 years old Sapam Rajiv, grandson of the first Manipuri film director late SN Chand, it was his first time travelling outside Manipur when he travelled to Goa to present his grandfather’s film ‘Brojendragee Luhongba’ at the prestigious 53rd International Film Festival of India (IFFI).

‘Brojendragee Luhongba’ released in 1973 is the first film by a Manipuri director. Almost 50 years after its release and after being in a dilapidated condition for several years, the restored and digitised ‘Brojendragee Luhongba’ was today screened at INOX, Porvorim for the international as well as national delegates of the festival.

In 2013-14, when Rajiv was still a kid, he would often pull out the prints of the film from the corroded canister containing the reels and wonder what his grandfather’s film was like.

His constant thirst to watch the film was partially quenched when the restored and digitised ‘Brojendragee Luhongba’ was screened for public viewing on April 29 last year during the yearlong Golden Jubilee Celebration of Manipuri Cinema that kicked off in April 2020. The last known public screening of the film was in 1986, 15 years before Rajiv was even born.

According to Rajiv, getting to watch the film for the first time last year was what aroused him to trace footprints of his late grandfather and properly document his contributions for Manipuri Cinema.

“I feel privileged to present my grandfather SN Chand’s film ‘Brojendragee Luhongba’ on his behalf. Who would have thought I’d be watching the film, I often wonder how it was like as a child, on the big silver screen? This moment is of great joy and importance for me and also inspired me to take up film preservation and filmmaking,” Rajiv said.

Had the preservation of Manipur’s film heritage and archiving works been a little more delayed, even the first Manipuri feature film directed by a Manipuri could have been confined to its historical status only with the younger generations having hardly any access to the film.

Luckily, through the preservation efforts of the Manipur State Film Development Society (MSFDS) under its SN Chand Cine Archives and Museum dedicated to the father of Manipuri Cinema with assistance of Film Heritage Foundation, Mumbai, ‘Brojendragee Luhongba’, film directed by the first Manipuri director, finally racked up international recognition at the 53rd IFFI.

Prior to the screening of ‘Brojendragee Luhongba’, Manipuri non-feature film ‘The Silent Poet’ directed by Borun Thokchom was screened.

SN Chand’s grandson Sapam Rajiv, ‘The Silent Poet’ director Borun Thokchom among others were also felicitated ahead of the screenings.