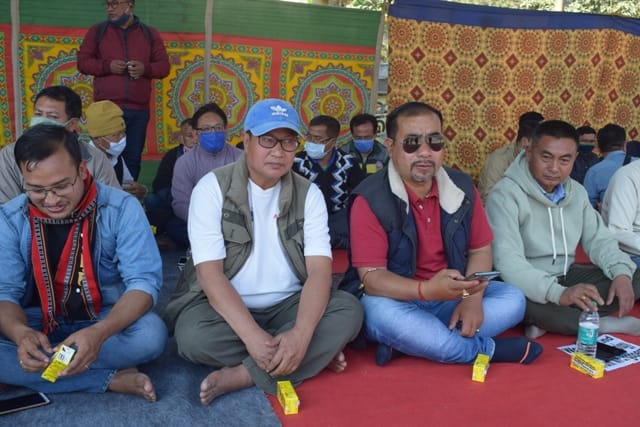 “There is no place in a civilized society for such an act of threatening the media persons who are working 24×7 with dedication for the welfare of the people,” the Minister said in a statement. Th Biswajit strongly condemned the attack and termed it as “an attempt to strangulate the freedom of expression”.

Rajya Sabha MP, Leishemba Sanajaoba termed the attack as “highly condemnable’, he said, “media is the fourth pillar of democracy. Stating that such acts should not be repeated again, he called upon all peace-loving people of the state to condemn such act of violence.

The Indian Journalist Union also expressed grave concern over the frequent attacks on media houses and journalists  in the state. The IJU while demanding of the state government “investigate the incident of the bomb attack and bring the culprits to book”, also urged it to ensure the safety and security of journalist and media houses in the state.

On Saturday evening, an unidentified person suspected to be a militant hurled a hand grenade inside the office of ‘Poknapham’ daily at Keishampat. However, the grenade failed to explode. Immediately after the incident, all the Imphal-based media houses including print and local TV channels halted publication and broadcast.

Hundreds of media persons also staged a sit-in protest at Keishampat against the bomb attack on Poknapham on Sunday.

While submitting a memo to the Chief Minister later Sunday evening, the media bodies said that the journalist community in Manipur has come under pressure from various quarters of late.

On Saturday at about 6.38 pm an unknown person lobbed a hand grenade inside the office of Poknapham & The People’s Chronicle daily, situated at Keishampat Thiyam Leikai. Unfortunately, the grenade failed to explode, it added.

“Nevertheless, the incident has triggered a sense of insecurity among the working journalists and media houses. As such, we urged the Hon’ble Chief Minister to intervene in the matter to arrest the culprit responsible for the attack and ensure safety and security of the journalists in the state,” the memo said.