Barak valley, from where the BJP rose in prominence in Assam banking mainly on Hindu Bengali’s vote, this assembly election, faces an uphill task to save its bastion. 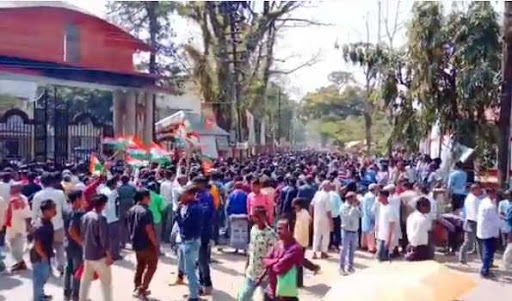 Silchar: It’s a stark contrast! Though they speak the same language but religion divides them politically and electorally.
Barak valley, from where the BJP rose in prominence in Assam banking mainly on Hindu Bengali’s vote, this assembly election, faces an uphill task to save its bastion.
The “Grand Alliance” partners Congress and Badruddin Ajmal led AIUDF has come together to up a united fight to consolidate Muslim votes behind them.
In all probability, the Barak valley region which comprises of Cachar, Karimganj and Hailakandi districts will see a microscopic polarisation.
Muslims form close to 60% of the population, according to the 2011 Census. The population of Cachar district, which forms Silchar Lok Sabha constituency, was nearly 60% Hindu and 37% Muslim.
BJP in 1991, registered its most impressive performance winning 10 seats, and in 2016 it nearly repeated the same performance winning 9 seats out of the total 15 seats. But this time around saffron camp faces a stiff challenge in form of the Congress and AIUDF alliance.
In 2016, BJP gained the most when both these parties fought against each other, as the division of votes between the two, helped BJP to score an electoral win.
Majority of the inhabitants of the Barak districts irrespective of Hindu or Muslim in Cachar, Hailakandi and Karimganj – identify themselves as Sylheti Bengalis.
When the borders were drawn at Partition, most of Sylhet opted to go with East Pakistan in a referendum, which has been alleged by many Bengali speaking Hindus as a one sided affair, which forced them to suffer the brunt of partition, which according to them was never well documented.
Only three-and-a-half police station areas of Karimganj, once part of Sylhet, remained with Assam.
But Sylheti food, customs and language, a full-bodied version of Bengali, are spread across all three districts.
“When one speak about Bangladesh in Upper Assam, they think that somebody is refereeing to foreigners….but for us we have a history with Bangladesh, Sylthet was part of Bangladesh. Our forefathers are from Bangladesh…so when one party comes into the valley and play with our biggest fear that we will decimate detention camp and than built new detention camps… can you think what it means to us,” Former MP from Silchar Sushmita Dev told UNI.
And that’s is where the lies the catch, the Citizenship Amendment Act (CAA) and National Register of Citizens (NRC) both played with this fear of citizenship with the people of the region.
Many Bengali speaking Hindus of the region who were left out of NRC are banking heavily on the implementation of CAA to get their citizenship, an act which is widely opposed in the Brahmaputra valley of Assam.
“In an attempt to misguide the people of Assam and Barak valley with respect to CAA, Congress is indulging in propaganda. People of Assam are smart enough to know that a law framed by the Indian Parliament can’t be amended in any state legislative assembly,” said Rajdeep Roy, Member of Parliament from Silchar parliamentary seat.
The Southern Assam region has traditionally been defined by its linguistic identity – in the 1960s, the Bengali language movement grew in the Barak Valley in reaction to Assamese linguistic nationalism.
The region goes to polls in the second phase on April 1. By Abhijit Deb

Washington: The United States has redoubled efforts to reform and improve Taiwan's defense system amid alleged threat from China,...
Nation