Crafted by designer duo Shantnu & Nikhil in the iconic MI blue & gold colour scheme, the jerseys dedicated to the local fans, pay homage to the culture and history of the two regions. 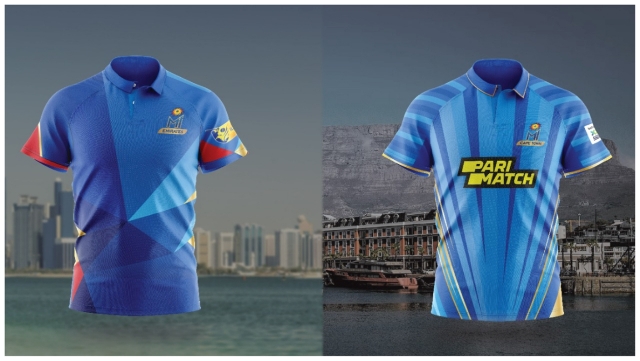 Mumbai: MI Global on Thursday unveiled the official playing kits that its two new teams — MI Emirates and MI Cape Town will be donning for the upcoming inaugural season of International League T20 (ILT20) and SA20 in UAE and South Africa respectively.

Crafted by designer duo Shantnu & Nikhil in the iconic MI blue & gold colour scheme, the jerseys dedicated to the local fans, pay homage to the culture and history of the two regions.

The MI Emirates jersey celebrates the root through a global eye that the world uses to visualize this emerging new part of the world. Re-imagining Emirates through modern art, its iconic structures and pristine beaches through sketches on a modern artist, sand dunes take a triangular landscape, presenting a myriad of scapes in various shades of blue and gold.

The MI Cape Town jersey is a modern artist’s interpretation of savannas, faunal stripes, abundance of natural resources that lies in the rich culture and heritage of the region. The jersey mirrors the legacy of the land celebrating its people. The history of civilizations and the potential of the land comes alive in gold which subtly blends in various shades of blue.

Designers Shantnu & Nikhil said, “Our long association with Mumbai Indians for over a decade, has always brought a fresh perspective to the iconic ‘Blue and Gold’ jersey, rooted with a large story and meaning conveyed through each creation. Getting inspired by culture, sportsmanship, local elements along with infusion of art, we have always centered our approach around the world as one big family. This year we dived deep into indigenous culture, marrying it with millennial approach and creating jerseys that reflect the pride that the team upholds. We are elated to bring forth these iconic jerseys to the people that celebrate this sport religiously.”

Earlier this year, MI acquired two franchises in the upcoming ILT20 league in UAE and SA20 in South Africa, further expanding its stature and reach globally.

The new members of Mumbai Indians ‘One Family’, MI Emirates and MI Cape Town are going to debut in the respective inaugural seasons in January 2023. Both teams will be taking the field amidst much anticipation owing to the line-up of players and the brand of cricket that MI is known for.