Motha sources said apart from Pradyot, its president Bijoy Kumar Hrangkhal, senior party leaders Animesh Debbarma, Chitta Debbarma, and Mevar Kumar Jamatia are scheduled to leave for Delhi in the afternoon to attend the meeting likely to be held on Thursday. 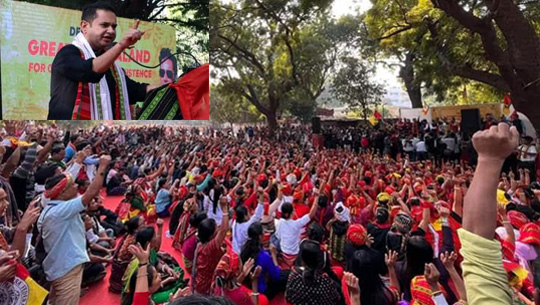 Agartala: A day after the announcement to fight the election to Tripura assembly alone, the Ministry of Home Affairs on Wednesday called TIPRA Motha Chief Pradyot Bikram Kishore Debbarman to Delhi for discussion on their demand of Greater Tipraland.

Motha sources said apart from Pradyot, its president Bijoy Kumar Hrangkhal, senior party leaders Animesh Debbarma, Chitta Debbarma, and Mevar Kumar Jamatia are scheduled to leave for Delhi in the afternoon to attend the meeting likely to be held on Thursday.

“TIPRA is all set to announce the candidate for 50 assembly constituencies, as no party has agreed to give written assurance of Greater Tipraland. We had several rounds of talks with top BJP leaders and Congress too but the response was not satisfactory. Nevertheless, MHA calls a meeting for discussion if our demand is fulfilled – no problem to go for an electoral alliance with BJP,” said a senior Motha leader here.

Hrangkhal, however, admitted that they received MHA invitation to join the discussion and said, “Although it is much delayed, hopefully, they realized the legitimacy of our Greater Tipraland demand. We have not asked for anything unconstitutional or illegal. From the very beginning, we have been demanding a constitutional solution to the problems faced by the indigenous people of the state on their own land for 72 years.”

He pointed out, “If we get a written clear-cut promise towards our demand, we will go to the polls with the BJP. Either a separate state entity has to be declared for us by elevating the status of ADC like Telangana or Greater Tipraland, which we have been demanding with an extended geographical boundary should be accepted.”

On his social media handle, Pradyot wrote, “In the beginning, no one believed us then We Fought and today we are on the verge of winning, we have to think about our people and the constitutional solution to the problems. We need unity and that comes only when you put your people’s interest over your own #TIPRA is Coming”.