Tripura police warn action against field-level personnel in any dereliction

Tripura police have been facing severe pressure from ECI following the series of complaints by the opposition parties against the policemen for playing a partisan role in favour of the ruling BJP over the last five years. 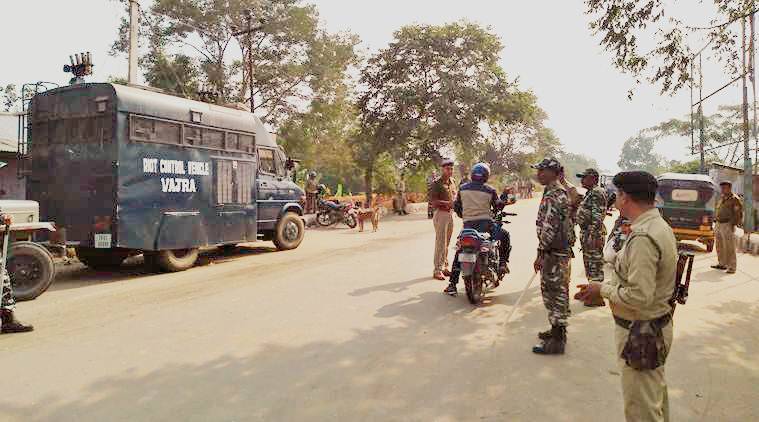 Agartala: With the arrival of three Special Observers in Tripura, police headquarters on Wednesday directed all the Sub-divisional police officers (SDPO) and Officer-in-charge of the police stations to follow the instruction of the Election Commission of India (ECI) letter and spirit to ensure Zero Poll Violence.

Tripura police have been facing severe pressure from ECI following the series of complaints by the opposition parties against the policemen for playing a partisan role in favour of the ruling BJP over the last five years. There are thousands of complaints from the citizens and opposition parties against BJP cadres have been pending with various police stations in the state waiting for action.

The police administration jerked after ECI had suspended SDPO Jirania and OCs of Jirania and Ranirbazar police stations where 32 Congress workers were assaulted by BJP cadres led by Information Minister Sushanta Chowdhury in presence of a large contingent of security forces but police didn’t take any action on Jan 18 last.

The officials said during the review of police functioning and complaints of violence, Special police observer (Retired DGP of Madhya Pradesh) Vivek Johri expressed displeasure over the operation and directed police to function ‘neutrally’ beyond pressure from political parties and to ensure the free, fair, and a peaceful election promise of ECI.

Immediately after the direction, IGP (Law and Order) in an order issued a warning saying that action will be taken against the OC and SDPO of the area if the illegal bike rally is not stopped. The SDPOs and OCs of all the districts have been told by the election cell of the police that no motorbike rally would be allowed anywhere without proper prior permission.

In a separate communication, the police directed all the field-level police officers up to the level of district SPs to ensure a peaceful election and not to compromise with any violence or criminal attempt, which may cause fear among the voters and terrorize the situation. Accordingly, the police swung into action and so far, arrested more than 132 people in five days in connection with criminal activities.

Police arrested a BJP leader of Bamutia assembly constituency of the city on Tuesday night from Usha Bazar area near the Airport, and a pistol and two magazines, and 46 rounds (7.62 mm) cartridges were recovered from his possession. Another youth of Khowai was arrested with a huge amount of cash while traveling from Amarpur. Police have yet to ascertain the source of the money and its destination.