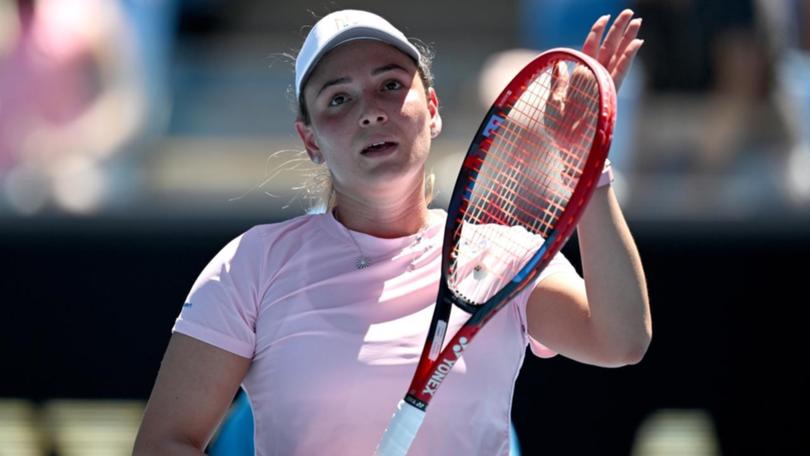 Melbourne: Aryna Sabalenka served her way into a first Australian Open semifinal, battling past Donna Vekic 6-3 6-2 in a match far more complex than the scoreline indicates.

The fifth seed needed one hour and 49 minutes to seal the win on Rod Laver Arena.

“Here it feels really special to be in the semifinals,” said Sabalenka. “I definitely love this place.”

As the sun beamed down on Rod Laver Arena, Vekic served a trio of double faults in her opening service game, sowing seeds of uncertainty that began to plague her each time she stepped up to the baseline.

The double faults seemed contagious across the net, although Sabalenka shook them off, letting out roars of “Come on!”, channelling the tiger tattooed on her left forearm.

The fifth seed converted break point to gain a 3-1 early edge, although a misfired forehand gifted Vekic back the advantage. The pair found themselves in an uncomfortable tussle with any rhythm seemingly out of reach.

The more accomplished Sabalenka benefited from another pair of Vekic double faults en route to securing a critical break in the eighth game, and saw off a break point while serving for the set at 5-3.

The 24-year-old closed it out with a crisp overhead that Vekic deflected off court, AO reported.

In the second set, Sabalenka’s pace off both wings troubled her rival, who was often caught jamming short returns directly into her opponent’s strike zone.

After an early break, Sabalenka lifted her intensity and, perhaps sensing a dip in Vekic’s belief, snatched yet another and a 3-0 lead, punishing the Croat’s 124 km/h second serve with a devastating backhand return down the line.

An untimely sixth double fault from Sabalenka enabled Vekic to break to love. Refusing to panic, the ever-aggressive 24-year-old dealt yet another blow with her trademark forehand to regain the double-break advantage and a 4-1 lead.

Serving for the match, the former world No.2 saved three break points before blasting a backhand that sailed long off Vekic’s racquet.

For a place in the AO 2023 women’s singles final, the fifth seed now faces Linette, who produced a stirring 6-3 7-5 upset of 30th seed Pliskova.

Sabalenka, a ten-time title-winner on hard courts, owns a 2-0 head-to-head advantage over the Pole.