“I am really very happy. This honor is not easy to get. It is a hard-earned honor and a lifetime achievement for me,” said Marak 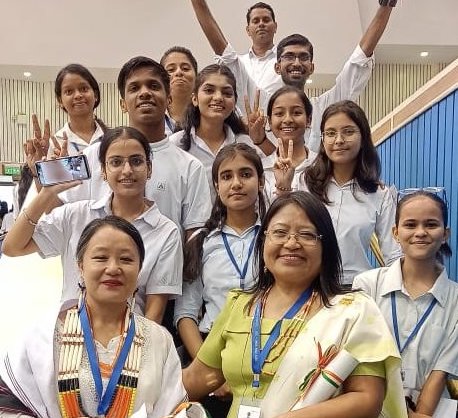 Shillong: Gamchi Timre R. Marak from a remote rural area in Meghalaya Monday received the National Awards to Teachers, which she calls a “hard-earned title” and her lifetime achievement.

Marak was among the 45 selected awardees to be honoured by President Droupadi Murmu at Vigyan Bhawan, New Delhi for her work as the head teacher of Educere Higher Secondary School at Samanda in Williamnagar, East Garo Hills District.

“I am really very happy. This honor is not easy to get. It is a hard-earned honor and a lifetime achievement for me,” said Marak, while sharing her story of shaping lives from a remote place.

She highlighted the role of education in moulding Williamnagar from its underdeveloped past to the developing present.

“In the beginning our area was backward and people were poor…A very few were educated back then. My husband and I decided to shift to this place after he got a government job. We had two options to choose from and Williamnagar was one of them. Since Garo Hills needed us more, we chose this place,” shared the national award recipient.

Her experience in the social sector helped Marak further realise the need for education.

“People really need to be educated. The area had to be developed. Since I was working with NGOs, people started looking up to me. They wanted me to be a teacher and so I finally decided to open a school,” she said, recalling the lack of schools and study culture during the inception days.

Her goal was to make the children competent and confident enough to hold their heads high and walk shoulder to shoulder with the rest of the world. And she was able to achieve this with the ‘social approach.

“What is education if the social factor is not looked after? Everything starts from home. And the home was suffering. We had to look after the children’s mindset, their psychology. We have looked after them physically, socially, mentally and also spiritually,” Marak said.

The head teacher introduced soft skills in the curriculum for the overall development of the children. “I tried to incorporate counseling. I conducted youth counseling wherein experts came in and interacted with the children. I invited youth counsellors so that they are aware of concerns like mental health, etiquette, HIV, drugs,” she said.

The National Award Winning Teacher has started the concept of “whole brain learning” to train the right as well as left brain to hone the children’s academic as well as fine art skills. Her ‘Mantra’ in guiding children is to understand that every child has different needs.

“Understanding a child’s mental makeup is very important to be able to properly teach them. I try to make our school a need-based one and not just about the academics,” she said.

Additionally, she introduced music, taekwondo and agriculture to the children living in one of the remotest areas in the hill state.