The Minister said the government is making all out efforts to get these health care workers vaccinated through counseling and awareness programmes. 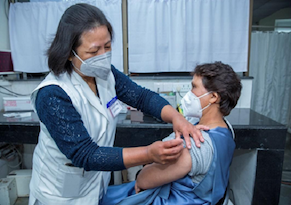 Shillong: Doctors, nurses and other health care workers in Meghalaya, who are still hesitant to take vaccine against Covid-19 are being counseled, Health and Family Welfare Minister, James K Sangma informed the assembly on Monday.

Replying to a query during Question Hour, Sangma informed that the number of unvaccinated health care workers in government hospitals was 2456 and that in private hospitals was 49.

“Ninety-three doctors and 462 nurses in the government sector and 48 doctors and 144 nurses in the private sector across the state refused to take vaccine against Covid-19 due to various reasons and myths,” he said.

“The total number is 2505, which is about 10 per cent hesitancy rate,” Sangma said in the course of his replies to opposition Trinamool Congress legislator Himalaya Shangpliang who wanted to know the rate of vaccine hesitancy among health care workers in the state.

The Minister said the government is making all out efforts to get these health care workers vaccinated through counseling and awareness programmes.

Listing the primary reasons for vaccine hesitancy among doctors, nurses and health care workers, based on a study by the Indian Institute of Public Health, Sangma said there were ‘myths’ doing the rounds in the social media that inoculation could lead to infertility and impotency, adding that there was also confusion among some as to which brand of the Covid-19 vaccine to opt for as there were several available.

He said that counseling was being carried out, specifically to dispel these myths regarding vaccination, adding that as on date, less than 1 per cent of physicians in the state were yet to take the jab.

When lone Nationalist Congress Party legislator Saleng Sangma of the treasury bench asked if these doctors and nurses who were hesitant to take vaccine were not in “normal state of mind”, wondering if it was prudent for them to treat patients and suggested that they should be sent on “holidays” till their counseling was complete, the Health Minister asserted that it did not necessarily mean that they had mental issues and that it was not required to send them on leave.

However, the Health Minister said that 70 to 80 per cent of the doctors, nurses and other health care workers who were earlier hesitant, have come forward for vaccination after successful counseling and expressed hope that 100 per cent vaccination of all personnel in the health sector would be achieved soon, adding that so far, 70.24 per cent of eligible persons in the state have received the first dose and 57 per cent have taken the second shot.

Meanwhile, the daily Covid-19 case count has been on a steady decline with four cases of new infection and seven that of recovery recorded today in the state, which has 140 active cases.