No untoward incident has been reported from any of 203 polling stations, the Election Commission official said. 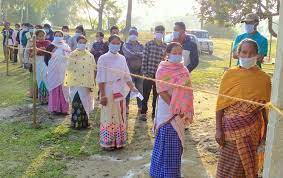 Guwahati: Around 65 per cent votes were polled in the by-election to Majuli assembly constituency in Assam, officials said. Polling which began at 7 am has been more or less peaceful.

No untoward incident has been reported from any of 203 polling stations, the Election Commission official said. Central Armed Police Forces (CAPF) personnel are maintaining a strict vigil in Majuli, the world’s largest river island, he said.

Long queues were seen outside many booths as people turned up early for casting their votes, while Election Commission officials have been asked to ensure strict adherence to COVID-19 protocols, he said.

Wearing of masks and availability of hand sanitiser at polling stations were made mandatory. Thermal scanning facility at each booth has also been arranged, the EC official said.

The by-election to the constituency was necessitated after former Assam chief minister Sarbananda Sonowal resigned from the assembly. Sonowal was elected to the state legislative assembly from Majuli for two consecutive terms in 2016 and 2021.

He was elected unopposed to the Rajya Sabha on September 27 last year and is now serving as union minister for ports and shipping. The ruling BJP’s candidate Bhuban Gam, the Assam Jatiya Parishad nominee Chittaranjan Basumatary and Bhaity Richong of the SUCI(C) are contesting the by-election. Altogether 1, 33,227 people, including 65,408 women are eligible to exercise their franchise in the bypoll.