Meghalaya CM to meet his Assam counterpart over boundary dispute

Issues pertaining to the proposed amendment of the Sixth Schedule and Eight Schedule to the Constitution would also be taken up, Sangma said. 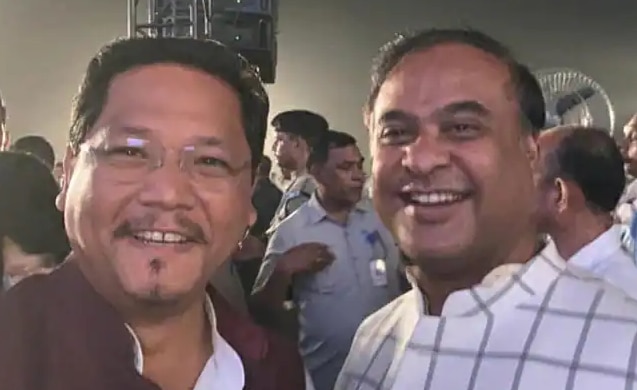 Shillong: Meghalaya Chief Minister, Conrad Sangma is scheduled to meet with his Assam counterpart Himanta Biswa Sarma in Dispur on Saturday at an “unofficial level” to discuss the decade long boundary dispute between the two states.
“As I have mentioned many times before that we have been having unofficial discussions on the very important subject many times and tomorrow is a continuation of that…while we sit we will also fix a date for an official meeting,” the Chief Minister said at a media briefing here on Friday.
On the other hand, Sangma, who is also president of the National People’s Party (NPP) informed that a meeting of the ruling Meghalaya Democratic Alliance (MDA) partners convened by him discussed issues,
especially that regarding the upcoming visit of the Union Home Minister Amit Shah to the state, the boundary issue with Assam, besides alleged irregularities in the power department and the social welfare department.
He mentioned that besides the Assam-Meghalaya boundary dispute, issues relating to the implementation of the Inner Line Permit (ILP) system would be discussed with the Union Home Minister, who is likely to visit the state on July 24.
“Many issues are there on the cards. Definitely, we will be discussing about the boundary issue with the Home Minister. He is also very keen to discuss about the aforestation and conservation work, especially in Sohra area. All the Chief Ministers of the North East have been invited,” he said adding that the Union Home Minister being the chairman of the North Eastern Council (NEC), several issues in this regard too would be discussed.
Issues pertaining to the proposed amendment of the Sixth Schedule and Eight Schedule to the Constitution would also be taken up, he said.
“All these matters will also be discussed with the home minister, But as I said a lot of homework has gone into how we plan to go forward in this,” the Chief Minister said, adding that a solution to the boundary issue between Meghalaya and Assam had to be largely acceptable to the people of both the neighbouring states.