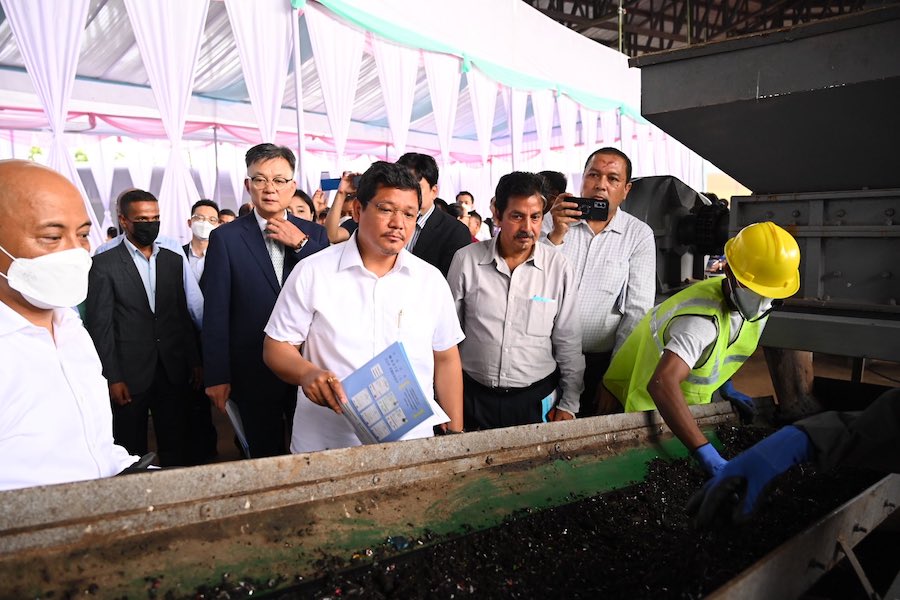 Tura: Chief Minister Conrad Sangma on Tuesday inaugurated the waste-to-fuel plant, the first plant of its kind in Meghalaya, in the presence of Ambassador of South Korea to India, Chang Jae-Bok.

The plant situated at Tura Municipal Board landfill site at Rongkhon Songital in West Garo Hills district will be operated by a South Korean firm, Chamhana GW.

“The project will convert plastic and food waste into energy blocks and theprocess of turning the heaps of garbage lying on the landfill site would take about 9 to 12 months to be converted since they first need to segregate the mud from the waste,” the Chief Minister said.

Sangma said the project would be expanded to Shillong, Jowai, Nongstoin and other districts as well in the coming days.

Recalling his visit to the landfill site way back in 2019, the Chief Minister said the amount of garbage dumped at the site poses a great challenge on how to dispose of the waste and said that with the collaboration with the Chamhana Company, the fuel plant is expected to reduce waste and revert and recover the environment as before.

Moreover, he said the project has been envisioned as a working model demonstration (Proof of Concept), to manage the daily incoming municipal garbage of Tura town and its adjoining areas.

Talking at length about the project, the Chief Minister informed that the project was conceptualised way back in 2019 but due to the pandemic it had to be put on hold.

The currently installed waste to energy plant will work by converting all waste except recyclables like metals, glass wood and e-waste, construction waste into fuel briquettes.

The fuel briquettes can then be used as a replacement for coal and charcoal.
Terming the project as a win-win for all, the Ambassador of South Korea to India, Chang Jae-Bok, who is on his maiden visit to Meghalaya, said that the pilot project is the start of many meaningful and mutually beneficial collaborations that Korea and India could have in the field of technology that has the potential to greatly enhance the quality of people’s lives.

“Our (Republic of Korea) Embassy in New Delhi will make our effort to further develop this kind of mutually beneficial projects and cooperation in the future”, the South Korean diplomat said.