In his address, Chief Minister, Conrad K Sangma, expressing happiness to hold the Cherry Blossom Festival again this year said that the government has always been trying to make it an annual event making it more inclusive and innovative while promoting Music, Art and Culture. 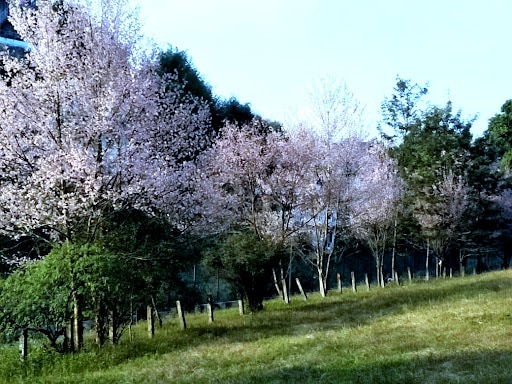 The Ambassador was accompanied by his wife and the Japanese delegate. The first edition of Shillong Literary Festival that was also a part of the Cherry Blossom Festival was also inaugurated during the occasion.

In his address, Chief Minister, Conrad K Sangma, expressing happiness to hold the Cherry Blossom Festival again this year said that the government has always been trying to make it an annual event making it more inclusive and innovative while promoting Music, Art and Culture.

“For a region like the North East that has immense talent, it is not only about giving them a platform but also giving them the opportunity to come together to learn and to share their ideas and talents,” he said.
Sangma also informed that as the State will be celebrating 50 years of statehood a number of befitting programmes have been lined up across the State that will give an opportunity to the youth to showcase their talents.

“The government in the next few months will for the first time engage with the musicians of the State in a very constructive manner giving budding local musicians not only the platform but helping them to take Music as a career option,” he said.

The Chief Minister further said that the government is focused on creating entrepreneurs out of the artists in a sustainable model where the talent and passion of a youth can become his livelihood.
Sangma hoped that the Shillong Literary Festival which is being held for the first time will give an opportunity to writers, readers and authors from the State to connect with other big names of literati from the country.

The Chief Minister also thanked the Japanese government for the support it has given to the State.

Addressing the gathering, Ambassador of Japan to India, Satoshi Suzuki, said that the Cherry Blossom Festival will build the People to People relationship not only within India but between Japan and India.
“Exchange of programmes between two nations is essential to enhance cultural ties and Japan has been inviting promising young leaders from the North East region under the Japanese programme Iris and Indian students have resumed travelling to Japan under the Japanese scholarship programme,” he said.

Suzuki added that the North East enjoys a strategic location that is key to the realization of Japan’s Free and Open Indo-Pacific (FOIP) vision.
“Japan is proud of being a reliable and staunch partner for the North east based on our based on our historical ties, trust and friendship, the shining example of our assistance to the region is the North East Road Connectivity Project which will greatly benefit Meghalaya and enhance connectivity with Assam and Bangladesh,” he added.

Suzuki also said that Conservation of nature is also a key area and Japan has been assisting in realizing sustainable development through JAICA’s projects for community-based forest management and libraries improvement.

“We aim to restore and conserve forest and natural resources of the village communities and also helping Meghalaya to utilize its abundant water resources by renovating and modernizing the Umiam hydroelectric power plants,” he informed.