After the minor was traced, the victim said in court she and her friend were taken to Rimpu Bagan and sexually assaulted. 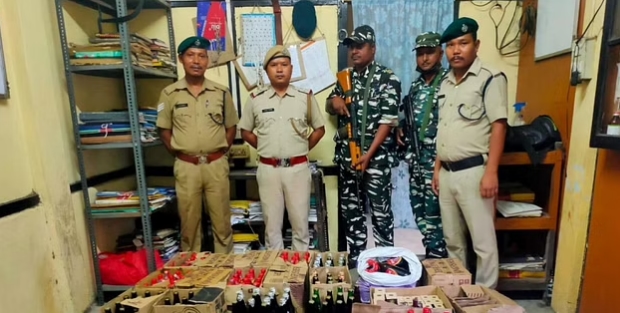 Shillong: A farmhouse of Meghalaya BJP vice-president, Bernard N. Marak, which was earlier a designated camp of a disbanded breakaway faction of the A’chik National Volunteers Council (ANVC-B) the militant outfit in Garo Hills was being used as a brothel, a police official said on Saturday.

Marak, who is an elected member of Garo Hills Autonomous District Council, has refuted the police allegation. He, however, accused Chief Minister Conrad Sangma of targeting him through the use of state machinery to malign his image through a bogus police raid because he is politically weak for the Tura assembly seat.

Assembly elections are scheduled in 2023.

The discovery of the farmhouse being used as a brothel by Marak, a former militant leader-turned politician, came to light during a police raid on Saturday night based on a police complaint of a missing case involving a minor.

After the minor was traced, the victim said in court she and her friend were taken to Rimpu Bagan and sexually assaulted.

During the raid, police found evidence and rescued six minors, and arrested 73 people from the farmhouse known to many as Rimpu Bagan.

A case under the Immoral Trafficking (Prevention) Act, 1956 has been registered against Marak and his accomplices under the Tura police
station “We have seized 500 unused contraceptives condom packets, knives, one crossbow barnet with 44 numbers of arrows, several hundred
bottles of liquor, an ATM card of Bernard Marak, 49 mobile phones, 36 vehicles, incriminating documents, and cash of Rs. 30,000 were seized
from the farmhouse,” Vivekanand Singh Rathore, the district police chief of West Garo Hills, said.

On thorough searching, of the three-storied building (two floors in the basement and one floor above ground level) with approximately 30 small rooms, Rathore said five children, including one girl, were also found locked inside a dingy cabin like unhygienic rooms.

“All the children were in a state of shock and were unable to speak properly. The children were handed over to District Child Protection Officer (DCPO) for safe custody and further necessary
action as per law,” the police official said.

From the materials recovered at Rimpu Bagan as well as the design of the building, Rathore said, it appears that the farmhouse was being used by Marak @ Rimpu and his accomplices as a “brothel” for the purpose of prostitution.

“We have verbally instructed Marak to cooperate with the
investigation and surrender himself at Shillong Sadar police station immediately. However, he (Bernard) has not cooperated and is evading
arrest,” the police official said.

Police records indicate that Bernard N. Marak @ Rimpu is a known criminal with more than 25 criminal cases registered against him since the early 2000s.

Marak was the self-styled Chairman of the now disbanded militant
an outfit named A.chik Nationalist Voluntary Council (B) and even after
the disbandment of the outfit, he has been indulging in criminal activities like extortion from traders of Tura market, criminal intimidation in case of refusal to pay extortion money, arms smuggling, prostitution, illegal sale of liquor, illegal sale of lottery tickets, encroachment on other’s property,
illegal collection of money for recommending the issue of TNT license, police alleged.

Meanwhile, Marak has termed the raid at his farmhouse and later at his mother’s house as “pre-meditated” and said that all allegations are targeted to arrest him with fabricated allegations.

“It is immaturity on the side of the Chief Minister to target me and my family members just because he is losing ground politically in the State. People are losing faith in the NPP-led government in the State and it’s imminent that the NPP will lose most of the seats in the upcoming election,” Marak noted in a statement issued via WhatsApp.

“The desperate attempt to malign my image and harass my family members and supporters is eminent in the way they took the law into their hands. The Chief Minister also drinks and parties and most of his supporters own the wine stores in the state and run bars but why isn’t he (Chief Minister) within the same purview of the law? Is he above it?,” the BJP leader asked.

“If he (Chief Minister) can have his private parties in his residence with alcohol being served, why can’t another citizen within the same boundary of law be allowed to do so? This is a tribal state and eating and drinking are part of the culture. This vengeful act shows an ulterior motive behind the Chief Minister’s mind. Targeting my personal image with a greater intent aimed at the BJP, to create a negative impact on the voter’s mindset is what looks like the motive behind such an act,” Marak said.

Refuting the allegation of running a brothel, Marak said, “None of those detained were involved in any indecent activities during the raid. The police trespassed and harassed the minor students whom I was sponsored to study and alleged them to be involved in sexual activities which is false.”